Can You Overdose on Weed, Marijuana or THC?

It seems that not a day goes by that I do not see some post on social media claiming that there has never been a death due to marijuana overdose. There’s just one problem with this: it simply isn’t true. In fact, spreading this myth is quite dangerous because it could well encourage someone to ingest a fatal dose of marijuana in the false belief that there is no such thing as marijuana poisoning.

The truth is that although marijuana is one of the safest drugs around, far safer than opioids, alcohol, Tylenol, or antidepressants, it is still toxic when the dose is large enough. So, let’s take a look at the real facts.

The CDC WONDER database is a public access database which records every death certificate filed in the United States between 1999 and 2014; according to this database there were 287 deaths due to cannabis or its derivatives in 2014. Numbers of deaths are calculated using UCD codes X40-44 (accidental drug poisoning), X60-64 (drug suicide), X85 (drug homicide), Y10-14 (drug poisoning of unknown intent) and MCD code T40.7 (Cannabis and its derivatives). Cannabis poisoning trends from 1999 to 2014 are given in Figure 1. 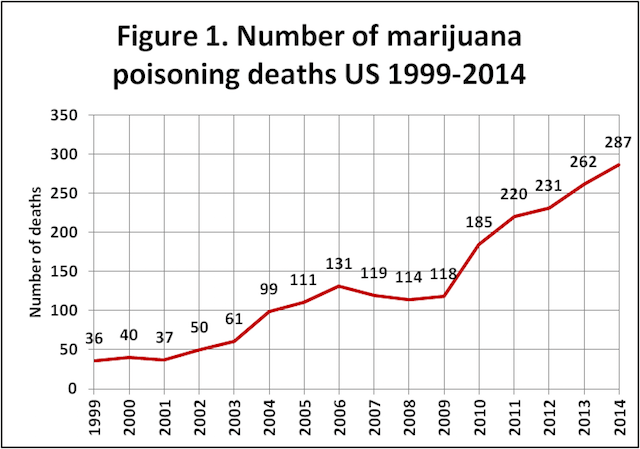 So how does cannabis poisoning stack up against rates of poisoning by other drugs such as heroin, prescription opioids, alcohol, cocaine, benzodiazepines, Tylenol, or antidepressants? As we can see from Figure 3, there are far fewer deaths due to cannabis per year than any of these other drugs. 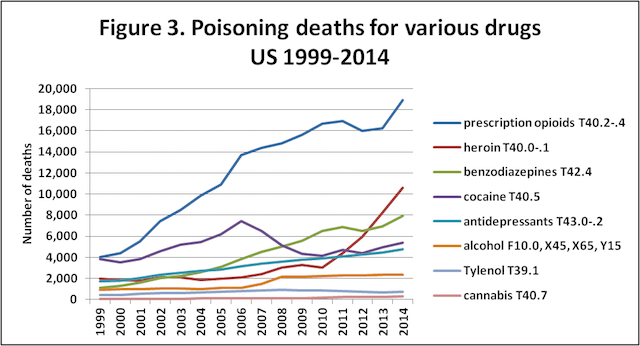 Take our free, 5-minute “Am I A Marijuana Addict?” self-assessment below if you think you or someone you love might be struggling with marijuana addiction or another substance use problem. The evaluation consists of 11 yes or no questions that are intended to be used as an informational tool to assess the severity and probability of a substance use disorder. The test is free, confidential, and no personal information is needed to receive the result.

What About Poisoning Deaths from Caffeine?

How Toxic is Cannabis?

Benno Hartung et al. (2014) report that the lethal half dose (LD50) for THC in humans is estimated to be around 30 mg/kg. This means that approximately 2 grams (.07 ounces) of pure THC has a 50% chance of killing a 150 pound man. This is the amount of THC found in .35 ounces of high grade weed with 20% THC content. Moreover, the DEA reports that concentrated THC derivatives known variously as “wax,” “dabs,” or “butane hash oil” consisting of up to 80% THC are now available on the streets; one tenth of an ounce of these would contain a lethal half dose of 2 grams of THC. Robert Gable (2004) also reports that the lethal half dose of marijuana is about 15 grams or one half ounce; however, he does not specify the THC percentage of the marijuana. It is likely that you are in more danger of consuming a fatal overdose if you eat your cannabis products than if you smoke them.

So please do not believe wild made up stories you will read online about how you would have to ingest over 1,000 pounds of marijuana to die or Wikipedia articles with made up numbers which cite no sources. Cannabis is indeed much safer than alcohol, Tylenol, or Prozac, and many, many times safer than prescription opioids, but it is still possible to ingest enough to kill you. Heck, even water will kill you if you drink too much too fast. Therefore, these internet memes which claim that there has never been a death due to marijuana are not only false, they are irresponsible and may in and of themselves lead to increased marijuana poisoning deaths by encouraging reckless behavior.