Here’s What Can Happen If You Smoke Too Much Weed

Brian just spent the last 10 hours in the shower. Why? It was the only way he knew to get the pain and nausea caused by cannabis overuse to stop.

Brian is one of an estimated 2.7 million Americans who suffer from bouts of cannabinoid hyperemesis syndrome (CHS). This condition causes vomiting and pain in heavy marijuana users. It used to be a rare condition, but the recent changes in marijuana laws have resulted in a flare-up in the number cases.

Dr. Eric Lavonas, director of emergency medicine at Denver Health and spokesman for the American College of Emergency Physicians, reports, “CHS went from being something we didn’t know about and never talked about to a very common problem over the last five years.”

Can You Get Sick From Smoking Too Much Weed? 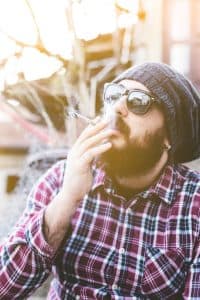 Many marijuana users develop the syndrome after years of smoking pot, so they don’t make the connection to their habit. Yet, the pain and nausea are too severe to ignore. Patients can also become dehydrated, which can lead to kidney damage.

Many CHS sufferers spend thousands of dollars on testing, and even surgery, in attempts to discover the cause of the symptoms. After multiple trips to doctors and emergency rooms, patients eventually receive the right diagnosis: “You’re smoking too much pot.”

Dr. Joseph Habboushe, assistant professor of emergency at N.Y.U. Langone/Bellevue Medical Center, notes, “I know patients who have lost their jobs, gone bankrupt from repeatedly seeking medical care, and have been misdiagnosed for years.

Marijuana is probably safer than a lot of other things out there, but the discussion about it has been so politicized and the focus has been on the potential benefits, without looking rigorously at what the potential downside might be. No medication is free from side effects.”

Is There a Cure for Cannabinoid Hyperemesis Syndrome (CHS)?

CHS symptoms generally don’t respond to drug treatment. Anecdotal evidence exists for the “hot shower cure.” Patients have reported that taking hot showers is the only way to relieve the pain and nausea – some reporting that they stay in the shower for hours at a time.

There is a silver lining. CHS is curable, and the cure doesn’t require a shot, expensive treatment or surgery. Simply quit using marijuana. Yep – stop smoking marijuana and – voila! No more CHS.

But, getting people to stop using pot can be a challenge. Many have heard for years that marijuana helps relieve nausea, so they have a hard time believing the drug is truly the cause of their symptoms. Others simply don’t want to quit or find it difficult due to addiction.

Take our free, 5-minute “Am I A Marijuana Addict?” self-assessment below if you think you or someone you love might be struggling with drug addiction. The evaluation consists of 11 yes or no questions that are intended to be used as an informational tool to assess the severity and probability of a substance use disorder. The test is free, confidential, and no personal information is needed to receive the result.