The LSD Experience Illustrated with Self-Portraits 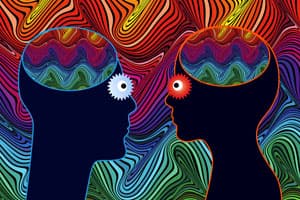 For people who use lysergic acid diethylamide (LSD), also known as acid, the experience is often described as spiritual.

LSD is one of the most powerful hallucinogens ever developed. Users have a hard time putting what they see and feel into words. The drug affects the brain in ways that make the user view the world as a more colorful and vibrant place.

Recently, a reddit user decided to put that theory to the test, using LSD and creating hand-drawn self-portraits throughout her entire experience or “trip.” The resulting pictures showed a dramatic and increasingly different perception of self, indicating that LSD can produce shocking changes in the way users see themselves – and the world around them.

The girl, whose name was not published with the drawings, reportedly spent between 15 and 45 minutes on each drawing. She was asked to create a self-portrait and worked without a mirror for the duration of the experiment.

The effects of LSD are usually felt in 20 minutes after dosing. The drug produces intense effects; users claim to “see sounds” and “hear colors.” Hallucinations and delusions are extremely vivid, altering perception of time, and creating visceral reactions. And LSD isn’t always a magical ride. The intense effects can be frightening, making its long duration extremely unpleasant.

Risks of Using LSD:
The risk of using LSD can depend on the amount taken, the person’s mood and personality, and the surroundings in which the drug is used. To put it simply – this is a drug that can create feelings of great joy or altered senses of distortion and paranoia. Sensibility and judgments are clouded.

Many LSD users experience flashbacks, leading them to relive the intense moments of the trip. The flashbacks usually occur without warning, sometimes even years after taking LSD. Some LSD users even end up experiencing long-lasting psychoses or severe depression after only one dose of the drug.