Staying Sober in a City That Embraces Legalized Pot

When I planned my move to Portland, I was excited by the prospect of adventure and was optimistic about my future – moving to the land of opportunity.

Portland is a liberal city that’s full of creatives – my kind of people. As a person who loves the outdoors, I was drawn to the vibrant green trees that permeated every skyline. I just knew it was the place for me. And so I moved here in January.

What I hadn’t anticipated was the scent of marijuana – everywhere. I also didn’t expect that it would make me feel uncomfortable in my recovery.

In my plans to move, I’d totally overlooked that I was moving to a city where marijuana was legal. It never even occurred to me to check. 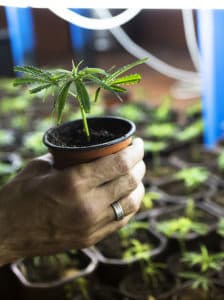 Even though marijuana wasn’t my drug of choice, it was a gateway drug for me; 12/13 years old I smoked my first joint with a bottle of vodka. I felt like someone had turned on a light in a darkened room – it awoke something inside of me. While I wasn’t a huge fan of the feeling marijuana gave me, I loved the altered state it provided. And it opened the door to the possibility of escaping myself with other drugs.

I spent the next twenty years trying other drugs in excess. Until I found myself on my knees, unable to take any more self-harm. Harm I’d been causing with substances. I found recovery in March 2012.

I had a consolidated period of recovery when I moved to the US, drugs and alcohol were so far removed from my everyday life that they just didn’t bother me. I lived in the UK – a nation known for excessive and binge drinking, with a pub on every corner. I thought if I could live there and stay sober, I could live anywhere.

It’s against those conditions that I planned my move. When I arrived, I wasn’t prepared. It felt like there was a marijuana dispensary on every corner. A brief walk down the street was punctuated by the smell of weed. The neighbors in my apartment building seemed to use marijuana in place of air freshener. Initially, it was just like being newly sober again: living among people who drink excessively, and there being a pub on every corner – except the only difference this time was the substance.

What’s great about Portland is that it has a tendency – as a liberal city – to challenge your biases. Since I moved here, I’ve taken the opportunity to question all of my uncomfortable feelings and judgements – from the prevalence of body hair on women, to the plethora of marijuana dispensaries and its’ open use.

When I investigated my thoughts, feelings, and judgments, I discovered I’d been conditioned in my perception of “normal.” It’s illegal to openly use or sell marijuana in the UK – and in most states in the US. I found it was the notion that people were doing something illegal that drove my unpleasant feelings, rather than their use of cannabis. The plumes of smoke and overwhelming smell everywhere, just punctuated society’s burgeoning acceptance of medical marijuana. This freedom from judgement challenged my established belief system.

Having challenged my preconceptions, I realized I didn’t feel threatened in my sobriety because I choose not to take drugs today and am actively engaged in maintaining my recovery. I don’t feel intimidated by the presence of so many dispensaries, or people’s open use of marijuana – I’m simply adjusting to it as a new “normal.”

While I don’t want weed in my home, in the same way I don’t want alcohol, if other people choose to do it then that’s entirely their choice. My recovery is about me living a sober life amongst all of life’s circumstances, it’s not about changing what others do to fit into my perception of a sober world.

Additional Reading:   Get Motivated – 5 Tools for Building a Sober Life