Massachusetts General Hospital is the first emergency department to offer buprenorphine to patients with opioid use disorder who want to start treatment immediately.

Doctors who want to prescribe buprenorphine, likely as a key part of a medication-assisted treatment (MAT) plan for opioid use disorder, can now opt to complete an eight-hour course—which includes listening to people who are on MAT and how it has improved their lives—and sign a physician waiver from the federal government. While this ensures that physicians know what it is they’re prescribing before they do so, some view this extra training as a hurdle by physicians that prevents them from offering this treatment.

That is something Dr. Ali Raja, executive vice chairman of the Department of Emergency at Mass. General Hospital (Mass. General) is frustrated about.

“If you can come in with diabetes that’s out of control or horrible blood pressure, we can give you medication, we can help. But having somebody come in and ask for help with their opiate addiction and saying, ‘No, I’m sorry, there’s nothing we can do,’ that’s exceptionally frustrating,” said Raja. 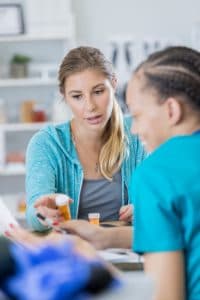 However, things are changing. In March, Mass. General became the first emergency department in Massachusetts to offer MAT to patients with opioid use disorder. There will be at least one physician in the ER who is training in guiding patients through MAT.

According to the American College of Emergency Medicine, Raja is one of 66 doctors who say their emergency departments should offer some form of MAT. It is hoped the Mass. General’s actions will trigger a ripple effect in other U.S. hospitals.

Dr. Joshua Sharfstein and associate dean at John Hopkins Bloomberg School of Public Health said, “What makes Mass. General initiative very important is, you and an extremely prominent hospital saying that we expect our doctors to be able to take care of opioid use disorder; this is not a condition of some other system, this is for us.”

Unlike traditional routes of recovery, including a short stay in detox or rehab, it is the intention that commencing MAT treatment in the emergency department will allow patients to go on and manage their care at home and in outpatient settings. They will be given a two-day supply and guidance on how to use the drug and connected to the Bridge Clinic where they can get follow up assistance.

Sadly, a short course and waiver are not the only hurdles physicians face. Last year, former U.S. health and human services secretary, Tom Price, was noted as criticizing MAT by stating:

“If we’re just subsisting one opioid for another, we’re not moving the dial much. Folks need to be cured so they can be productive members of society and realize their dreams.”

As you can imagine, those comments caused an uproar in the medical community, as over 700 physicians and researchers responded with scientific evidence that in fact, MAT meets the highest standard of clinical evidence for safety and efficacy.