I’m Getting Sober With My Girlfriend

Pat’s girlfriend, Rachel, was coming home from rehab in a week. Up to this point, he’d been a lifelong drinker. The son of an Irish man from the Bronx with a serious drinking problem, Pat grew up with the problems of alcohol, but it was also a part of his culture. In fact, he and Rachel met in a bar.

Pat enjoyed nights out with his old friends at the local pub. He enjoyed a glass of whiskey or a cold beer after work. But he cared about Rachel more. And though she insisted that he didn’t have to, he decided to get sober with Rachel. 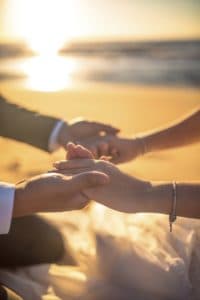 “I believe Rachel when she says it’s okay for me to keep drinking,” he told me.

“She even said it would be okay for me to drink around her. But it’s not just about not triggering her to drink again. It’s about us being in this together. If she’s gonna live a sober lifestyle, then I’m gonna do it too.”

Pat’s buddies noticed he was having a Coke at the bar. “What’s up with you man?” asked one of his oldest friends. “You get a DUI or something?”

Pat calmly explained he and Rachel had decided to be sober – together. His friends teased him a little at first, but after he assured him he was cool with their drinking, they left it alone and went back to their beers.

Looking Forward to a New Life

Pat and Rachel’s first dinner out was a little awkward. They’d always started off with cocktails and then split a bottle of wine…and sometimes followed it up with another cocktail or hit a bar on the way home.

The server ran down the list of specialty cocktails. Rachel ordered a seltzer with a dash of cranberry and lime. Pat got a Coke.

Rachel laughed nervously. “Well, I guess we don’t need to see the wine list,” she said.

Pat reached out and held her hand. “I’m so proud of you,” he said. She teared up a little. Their drinks came.

“To a new life,” he said, raising his glass. “To having the real Rachel back.”

Rachel and Pat are now thinking of starting a family together. That wasn’t something they could contemplate when Rachel was drunk every night. Now they can plan for a happy and sober future.

Additional Reading:   My Boyfriend Relapsed in My First Year of Sobriety