People have been selling drugs on the Internet for years. Not too long ago, there were hundreds of “doctors” online diagnosing chronic pain conditions without even speaking to their virtual patients. With a couple clicks of the mouse – and a hefty sum of money – prescription pain pills could be shipped to your front door. Those operations have all been shut down, while new ones have cropped up to take their place. And, believe it or not, the newest virtual marketplace for drugs is Instagram.

From Snapping Pictures to Selling Drugs?

Known as the “deep web” or “dark web,” modern drug dealers have learned to peddle their products via hard to trace websites. Last year, Silk Road, a prominent dark web drug site, drew so much attention that the United States government was prompted to step in. The underground drug den was shut down and its 29-year-old operator charged with trafficking conspiracy, computer-related fraud, and conspiracy to launder money.

Slowly but surely, the Internet drug trade adapted and migrated to Instagram. With a quick hashtag search, people can find just about anything they want. Stolen, grown, prescribed, synthesized, smuggled, or harvested; it’s all there. 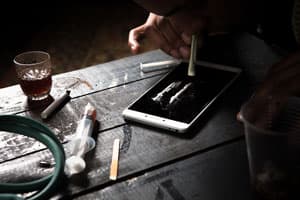 The social media boom has given anyone, especially teens, access to the marketplace of hardcore drug abuse. Last year, after several stories broke revealing the flagrant drug trade on Instagram, the social media giant responded by blocking a handful of specific hashtags. Naturally, the dealers overcame this speed bump by slightly altering the drug’s street names. Today, drug trade on Instagram is just as robust as ever.

A recent roundup by the Coalition Against Drug Abuse, though unscientific, totally exposes the Instagram drug market and reveals just how well-known this form of drug trade is. With usernames like “ihavedrugs4sale” and “buyweedhere,” virtual dealers aren’t exactly trying to hide their true intentions. The most popular items up for grabs include marijuana, prescription painkillers, xanax, ecstasy (MDMA), and lean (codeine syrup mixture). And surprisingly, the drugs are being shipped via USPS, UPS, and FedEx.

This isn’t the first time Instagram’s policies have been questioned. In August, a blog suggested that illegal psychedelics were also being sold via the app. A short while later, Vice revealed that marijuana and several kinds of prescription pills were being bought and sold through Instagram.

More recently, U.S. senator Edward Markey wrote to Instagram’s chief executive, Kevin Systrom, asking him to look into reports that drugs and unregulated gun sales were being conducted through the app. “Other companies that enable online sales have enacted commonsense protocols. I encourage Instagram to take similar steps and adopt safe business practices,” he wrote.