In the four years I was behind bars, I met some interesting women. Although the majority had traumatic pasts, one in particular still stands out.

Her name was Patty and she was, for a couple months, one of my cellmates. She was on the tail-end of a three-year sentence for various drug charges when I met her and, like many other prisoners, terrified of getting out. 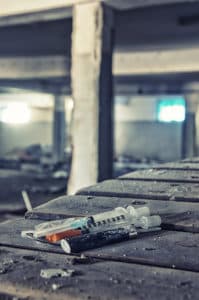 Patty shared her traumatic past with me – a past that involved an ex-boyfriend setting her up. He had given her the address of a drug dealer he supposedly knew, yet when Patti arrived at the house, she wasn’t allowed to leave. Ever. She ended up trapped in a prostitution ring for years. She became addicted to pills as a way to cope with the horrific nightmare that was her life…and that reality ultimately led to her stint in prison.

Sadly, what happened to Patty isn’t a rare occurrence anymore. A new report by the Berkshire Eagle brings to light just how prevalent this practice has become, with multiple sources speaking about the close connection between drug addiction and human trafficking.

As it turns out, “vulnerable drug addicts” are the ideal victims; traffickers can easily use drugs as a way to lure them into the trade. And addiction is what keeps them there, as women become so dependent on their next fix that they can rationalize sex work as a viable option.

Using Addiction as a Bargaining Tool

Recent arrests also serve as evidence to this tragic phenomenon. A 42-year-old man was recently caught trying to recruit a woman who was going through heroin withdrawal, promising to supply her an endless supply of the deadly drug. Meanwhile, another man was charged with trafficking after allegedly supplying women with fentanyl in exchange for commercial sexual activity.

Massachusetts Attorney General Maura Healey said that some human traffickers go a step further in selecting their targets. Many stalk out local methadone clinics and entice their intended victims with promises of drugs, food and housing. Once fooled and lured in, the women are funneled into the trafficking ring and forced to have sex with customers.

Unfortunately, experts anticipate the relationship between human trafficking and drug addiction will continue, especially in light of the opioid abuse epidemic ravaging our country. Hopefully, officials can crack down on those leading the sex trade and send them to where they belong: behind bars.

Additional Reading:   Breaking the Bank – The Hidden Costs of Addiction