More and more we see addiction portrayed in popular media, from the drug business of “Breaking Bad,” to the everyday debauchery of “Shameless.” Comedy Central recently introduced “Review,” a half-hour series starring Andy Daly as Forrest MacNeil, a critic of real life experiences. Ever wonder what it’s like to skydive, steal a car, have sex with a celebrity or roll on ecstasy at a rave? Forrest is your guinea pig.

The pilot episode follows Forrest into the dark world of drug addiction.

Patty, a viewer from Park City, Utah, wrote in a request: “Doctors tell me I have to be careful because of all the addicts in the human cesspool that is my family, but I’m not so sure. Forrest, what’s it like to be an addict?”

Forrest’s gut reaction is a risky mix of confidence and ignorance: “Well the only thing I’ve ever been addicted to is a thirst for knowledge.” Challenge accepted. The host then proceeds to try a few “famously addictive” substances to see if he can get hooked. All in the name of good journalism, right? 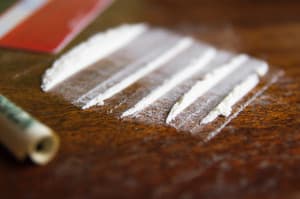 First up, Forrest takes on a row of “nicely made lines” in an office setting. He admits he’s nervous to try cocaine for the first time. With a rolled up dollar bill, he snorts one full line of blow off the desk, and his reaction is perfect: “No… ahh, oh … that’s like bleach in my sinuses… that’s terrible!” His instinct is to write off the drug — “it’s absolute garbage” — and throw the powder remains in the trashcan.

Many viewers can relate to what happens next. Still on his mission, Forrest proceeds to try cigarettes (cough: too harsh!) and alcohol (yawn: too tired!), but against all logic, he keeps thinking about the cocaine. With a subtle wink to the camera, he excuses himself to visit the bathroom.

Oh honey, that’s the oldest trick in the book.

When Forrest bursts back into the bar, his mood has changed entirely. No longer tired, he’s literally jumping about, waving his hands, speaking loud and cursing. There’s also the overconfidence — “what am I, a superhero?” — and the obvious residue of white powder surrounding his right nostril.

“When I get back from rehab, I’ll probably say cocaine is terrible. But don’t believe me! I give it a million stars!”-Forrest MacNeil
Does hiding your drug use mean you’re a drug addict? If you give in to one craving, are you addicted? This silly show raises those very serious questions.

“So I’ve tried cocaine, cigarettes, alcohol… didn’t get addicted to any of those. But there’s one more thing I need to try… cocaine!”

You can probably guess what comes next. Yes, Forrest’s first time quickly turns into “occasional recreational use.” He even convinces himself that cocaine is improving his life, making him more productive. But, how is his cocaine habit affecting others?

Forrest’s wife, Suzanne, quickly realizes money is missing from their bank account. Of course, Forrest denies the accusations and blames their son (whose name he couldn’t quite remember). The rock bottom moment comes soon after, involving a Boy Scout camping trip, a lack of cocaine followed by too much cocaine, a possible heart attack, and a classic family intervention.

Forrest, the man who was “invulnerable to addiction,” became a cocaine addict.

At the end of every “Review” segment, Forrest rates the life experience. For example, he gave Stealing two out of four stars. Here is what a belligerent Forrest had to say about Addiction, while on his way to rehab in a minivan.

“When I get back from rehab, I’ll probably say cocaine is terrible. But don’t believe me! Cocaine is amazing! I give it a million stars!”

“Review” is set to premiere Thursday, March 6 at 10/9c on Comedy Central. You can watch the entire pilot episode online at comedycentral.com.