Breaking the Bank: The Hidden Costs of Addiction

Two of the most commonly cited costs of addiction are the time and money invested in rehab. Rehabilitation varies in cost, with many celebrity treatment centers tallying a final bill that easily reaches six figures.

However, the financial dues and sacrifice of time required for substance abuse treatment are, arguably, just the superficial costs of addiction. In addition to an initial 70-day commitment, there are plenty of vastly overlooked hidden costs.

If caught by law enforcement in possession of illegal substances or if caught while committing a crime while under the influence, the resulting criminal and legal fees can be staggering.

One of the most common crimes committed in the United States is driving under the influence of alcohol. Depending on the state where the DUI offense took place, blowing a .09 can cost over $10,000 in fines, court fees, alcohol prevention classes and legal representation. For those ordered to wear a SCRAM, or an alcohol monitor, the operation of the bracelet costs the offender around $12 a day.

… if caught while committing a crime while under the influence, the resulting criminal and legal fees can be staggering. 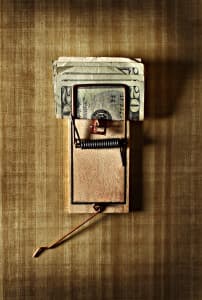 Being arrested for possession of drugs can also carry a heavy state prison sentence. For instance, the mandatory minimum jail sentence for being in possession of a gram or less of cocaine or heroin in the state of Texas is two years.

A common sign of serious drug addiction is the loss of employment. Being fired as a result of addiction can occur because of increased work absences or failing random drug tests. Some companies and large corporations require mandatory random drug screening if an employee’s behavior is causing the work environment to suffer.

Worse-case scenario is a drug-related crime that stamps a misdemeanor or felony charge on your permanent record. Smudged records can dramatically decrease future employment opportunities for years. A lack of job opportunities quickly leads to the next loss: income.

With overdrawn accounts, delinquent bills and maxed out credit cards, excessive spending and loss of employment are two financial woes that tend to go hand-in-hand with addiction.

Addiction comes with heavy wear and tear on the human body – both physically and mentally.
In severe cases, women who continue using during a pregnancy can cause long-term physical and mental complications for both mother and child.

Even for those who have medical insurance, the costs of multiple emergency room visits, ambulance transport and long stints in the hospital add up very quickly.
Learn more about choosing the right rehab facility.

Destiny LopezAUTHOR
Take the next step