5A Drink a Day Keeps the Doctor Away? A third of Americans believe in the perceived health benefits of alcohol, reveals survey.

• 46% perceive the main benefit of drinking alcohol to be a reduced risk of cardiovascular disease.
• More than a third admit they would continue to drink alcohol, even if proven to be damaging to the brain.
• 58% admit they don’t even take note of studies that link alcohol to health problems.
• 38% would continue to drink even if it was shown to reduce life expectancy.
• 62% think junk food has worse health implications than alcohol consumption.
• Infographic included.

The old saying goes ‘an apple a day keeps the doctor away,’ but what about when it comes to alcohol instead of apples? You may have heard that a daily glass of red wine could make you live longer or that a couple drinks per day can reduce your risk of stroke. Although a recent study by the University of Oxford found that there is no safe level of alcohol consumption for brain health, some have convinced themselves of the perceived health benefits of drinking.

Rehabs.com, a leading provider of resources relating to addiction and recovery, conducted a survey of 3,000 people and found that more than a third (39%) believe in the perceived health benefits of alcohol. Broken down, it appears men felt most strongly about these booze-related health boosts, with 45% believing so as compared to 39% of women.

Across the country, those in Michigan (67%) were most convinced of these health benefits. Comparatively, just 23% of those in Massachusetts choose to believe them. 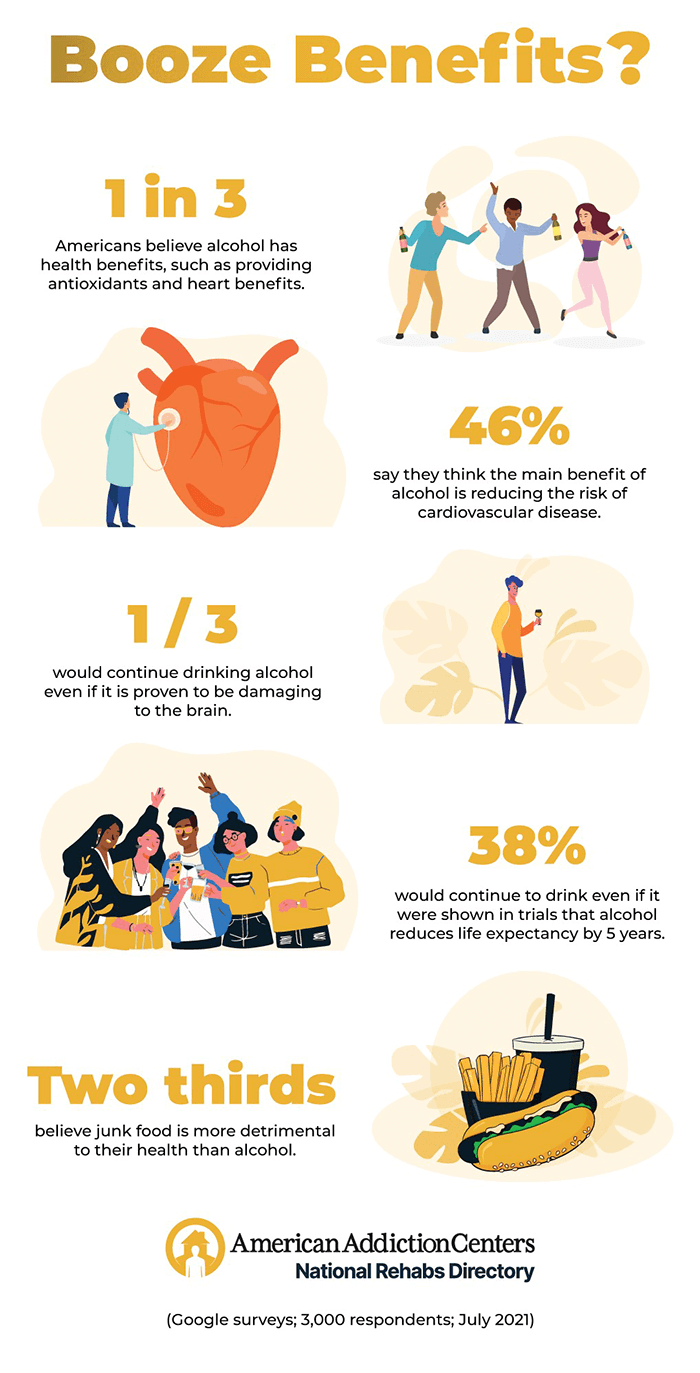 The survey also asked respondents what they believed to be the main benefits of alcohol consumption. Forty-six percent thought that it reduces an individual’s risk of developing cardiovascular disease and 31% believed it can increase life expectancy. An additional 15% were under the impression that it prevents you from catching a common cold and 8% believed it lowers the risk of diabetes.

Although the University of Oxford study found that increased consumption of alcohol correlated with a decreased volume of information-processing gray matter, more than a third of respondents (39%) said they would continue to drink alcohol, even though proven to be damaging to the brain.

In fact, more than half (58%) admit they don’t even take notice of studies linking alcohol consumption to health problems. Perhaps ignorance is bliss?

Thirty-eight percent also stated that they would still continue to drink if trials showed that alcohol reduces life expectancy by 5 five years.

Lastly, it’s well known that leading an unhealthy lifestyle, such as poor diet, excessive drinking and lack of exercise can have negative health consequences. While each of these factors contributes in its own way to a lack of good health, more than half (62%) of respondents believed eating junk food has worse health implications than consuming alcohol.