When most of us are hungry, we’ll get something to eat without thinking much about it. But for those who suffer from anorexia, hunger is a bad thing; it’s something to be suppressed.

Despite statistics showing that eight million Americans currently have an eating disorder and roughly one in 200 U.S. women struggle with anorexia, many can’t understand how a person would strive to avoid food for years or even decades.

A new study published in Biological Psychiatry sheds light on the brain’s role in irregular eating patterns of anorexic patients.

The Brain and Hunger

Lead researchers Dr. Christina Wierenga and Dr. Walter Kaye examined responses to hunger in two separate groups; 23 women who are recovered from anorexia and 17 healthy women without a history of eating disorders. 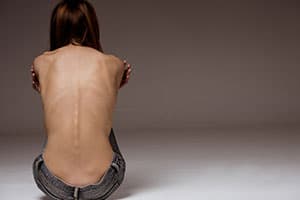 The scientists found that, when hungry, the healthy women displayed increased activity in the part of the brain that motivates reward seeking. Those in recovery did not display the same increased brain activity, but they did show an increase in the activation of “self-control” circuits that likely contribute to their ability to avoid food for long periods of time.

“This study supports the idea that anorexia nervosa is a neurobiologically-based disorder. We’ve long been puzzled by the fact that individuals with AN [anorexia nervosa] can restrict food even when starved. Hunger is a motivating drive and makes rewards more enticing,” said Wierenga. “These findings suggest that AN individuals, even after recovery, are less sensitive to reward and the motivational drive of hunger. In other words, hunger does not motivate them to eat.”

…findings suggest that AN individuals, even after recovery, are less sensitive to reward and the motivational drive of hunger.– Dr. Christina Wierenga

An experimental procedure is now being looked at to address malfunctions in the nucleus accumbens – the middle part of the brain – among a select number of clinically diagnosed AN patients.

The deep brain stimulation procedure involves inserting a small generator box, similar to a pacemaker, into the person’s ribs before running a wire into their brain.

A small Canadian study evaluated the brain implant therapy and ultimately came up with some pretty positive results. Keep in mind, however, this procedure would only be used as a last-resort option for patients who have failed all other treatments for anorexia.

Findings from this study could help to bring about new treatment methods for addressing responses to hunger in inpatient AN treatment. It’s ultimately about creating an equal mix of necessity and pleasure when eating – traits that have proven to be essential for a full recovery from this dangerous eating disorder.