National Eating Disorders Awareness Week is February 22-28. Though you often see eating disorders (ED) like anorexia and bulimia in the headlines, there’s another prevalent ED that doesn’t get the same exposure: binge eating.

Despite the lack of public awareness, researchers at Harvard published a previous survey that revealed binge eating is actually the most common eating disorder in America. 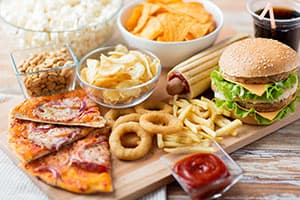 True to its name, binge eating includes patterns of uncontrollable eating. During these episodes, people consume excessive – sometimes dangerous – amounts of food. In most cases, the binging is followed by episodes of purging.

While both inpatient and outpatient treatments are available for binge eating, proactive steps can also be taken at home to help strengthen your recovery.

The binge eating recovery process can be heightened by gaining nutritional knowledge. With that in mind, here’s a look at 7 foods proven to cause overeating, making them bad choices for those who suffer from binge eating.

The recommended single serving of pasta equals one-half of a cooked cup, which takes up very little space on your plate at standard Italian restaurants. In fact, most restaurants pack three to four cups in a single entrée…and that’s still not enough pasta to satisfy many diners. Because the simple carbs in pasta produce a massive overload of insulin – dropping blood sugar levels and creating feelings of hunger – it’s easy for people to binge, especially when heavy appetizers and filling breads are included. 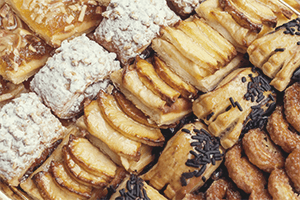 Although they’re delicious, these desserts have minimal nutritional value. Since they’re bread products, pastries essentially amount to empty calories. When sugary fillings or jellies are added to these confections, your blood glucose levels quickly skyrocket – only to plummet shortly thereafter. For people who binge, pastries are a nightmare because they don’t satisfy your hunger for longer than an hour.

A common ingredient in many popular Chinese dishes, a recent study found that the flavor enhancers contained in MSG can trigger a 40 percent increase in appetite. For people who are prone to binge episodes, this hunger-causing effect is extremely dangerous. What’s more, the effects of MSG can compound over time, meaning those who regularly eat dishes loaded with MSG tend to binge more in general.

Who doesn’t love a good pizza? Unfortunately, these pies can also throw off blood sugar levels. What’s more, pizza has a negative effect on the hunger-regulating regions of the brain. Essentially, the delicious – and totally unhealthy – combination of hydrogenated oils, processed cheeses and dough trick your brain into thinking you’re still hungry, despite the fact you’ve eaten enough to satisfy your hunger.

Just like pastries, the white flour in this type of bread is digested quickly and spikes your insulin levels, leaving you to feel hungry shortly after eating a meal. Once that hunger returns, so does the urge to binge. A simple solution? Switch to wheat bread – the taste is very similar, plus you don’t experience the negative binge-prone effects associated with white bread.

Whether it’s diet soda or flavored coffee from Starbucks, artificial sweeteners are found just about everywhere. Your brain expects to receive the same benefits it enjoys after eating natural sugars, but those benefits never come. When your brain is denied of these perks, it sparks feelings of hunger and the body tries to make up for the lack of energy it’s expecting. Thanks to the hunger pangs, the urge to binge returns with a vengeance.

While ice cream is a wonderful American treat, it offers nothing positive to anyone who struggles with binge eating. The high level of sugar and minimal nutritional value make a pint of ice cream one of the most commonly associated items with binge eating. Seek out healthier snacks, like nuts or dried fruits.