Texas is currently reeling from a rash of overdoses linked to K2, known as synthetic marijuana, which put 120 people in the hospital over five days.

The overdoses took place in a region of Texas that spans from Dallas to Austin, with 30 of the overdoses taking place in Dallas in just one day. News outlet KHOU reported that “the patients in Dallas were so sick they had to be sedated” before being treated.

“Several of them came in with similar symptoms of psychosis, altered mental status, abnormal behavior – ranged from very sedated to an agitated state,” said Dr. James E’tienne, an emergency room physician at Baylor University Medical Center. “We don’t know what they’re putting in these synthetic drugs.” Parkland Hospital physician Dr. Stacy Hail also noted that patients being admitted for K2 overdoses often “have to be restrained.”

The synthetic marijuana known as K2 has also been sold under names like Spice or Scooby Snax. It’s not grown organically and is typically made in drug labs from unknown chemical compounds. It reportedly produces a high similar to traditional marijuana when smoked. 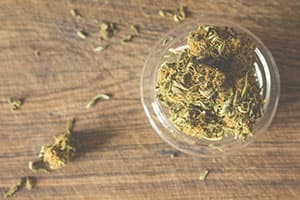 Most of the K2 sold in the US is manufactured in Asia with ingredients typically not fit for human consumption. Because of this, no two batches of K2 are the same. Regulating the drug has been almost impossible as a result because when one ingredient is banned, K2 makers simply replace it with another. Reported side effects have included memory loss, seizures and frothing at the mouth.

K2 was sold over-the-counter as a “legal high” at one point and marketed towards teens, with labels featuring smiley faces or cartoon characters like Scooby Doo.

K2 was sold over-the-counter as a “legal high” at one point and marketed towards teens, with labels featuring smiley faces or cartoon characters like Scooby Doo. But the US Drug Enforcement Administration classified it last February as a Schedule I controlled substance, meaning the sale of it is banned under any circumstances. Commercial drivers are also now banned from operating a commercial motor vehicle if caught using or possessing the drug.

Parents concerned about their teenagers using K2 should talk to them and explain the dangers of the drug. If you or someone you know has a problem with K2, consider looking for K2 addiction treatment centers in your area.