America’s love affair with fitness began in the early 20th century. Theodore Roosevelt, who has been labeled by some as “the most physically fit President to occupy the oval office,” promoted exercise as a necessary antidote to physical health ills, thus kicking off a long chain of United States leaders who sought to get the country more physically active.

During the two World Wars, our government was shocked at the poor fitness levels of many drafted soldiers: One in three drafted men were deemed unfit for combat in World War I and almost half of all draftees were rejected or denied fighting positions in World War II for the same reason.

Industrialization and urbanization were largely to blame for this rise in America’s vast “out-of-shape-ness.” With machines replacing the physical labor men and women once performed and the convenience of transportation coupled with resources concentrated to closer quarters, exercise started to become something one had to opt to do, rather than something one couldn’t avoid. Hence why various health and fitness professionals worked tirelessly to develop physical activity guidelines and mandate physical education for the public.

The Rise of Public Fitness Campaigns

During the 1950’s televised fitness became a new reality with the Jack LaLanne show and Jane Fonda’s aerobics. The American Health Association, American Medical Association, and other health-promoting organizations got behind what was then a burgeoning fitness movement. 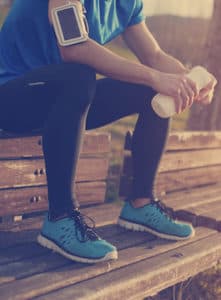 In 1954, the American College of Sports Medicine was founded and in 1956 both the President’s Council on Youth Fitness and the President’s Citizen Advisory Committee on the Fitness of American Youth were founded.

By the 1960’s, fitness was booming. Innovations in the fitness industry’s marketing skills were largely behind this: Promising to resolve any and all health concerns as well as confer a higher social status upon those who could exercise, fitness became a marker of purity, desirability, strength, and success.

As Heather Hausenblas and I write in The Truth About Exercise Addiction: Understanding the Dark Side of Thinspiration, “By the 1990’s, at-home exercise equipment sales had shot past the $1 billion mark, steadily increasing from $54.7 million in 1980 to $1.79 billion a decade later. During the same time, gym memberships flourished – jumping from 18 million users in 1995 to over 22 million in barely three years. By the end of the 20th century, few could deny that fitness had become an important marker of personal, interpersonal, and even professional merit across America.”

The Incessant Need for Perfection

Because exercise confers so many physical and social benefits to individuals (from the promise of ameliorating health concerns to the appeal of looking and feeling “better than” the average American, inching them ever closer to ideals of thinness, in-shape-ness, and optimal health), it can seem ludicrous to suggest that it could ever be a damaging, unhealthy, or dangerous thing. For decades it’s been ingrained in our culture as they key to perfect health (not to mention higher social status). Hence, challenging its “goodness” can frequently be perceived as bordering on heresy.

By suggesting that exercise can have negative consequences, if not gone about in a healthy manner or overindulged in, those who rely on it to regulate their health, moods, appearances, or social status are suddenly faced with a threat…-Katherine Schreiber

Questioning what a majority wishes to see as a panacea upends the belief in a perfect cure. Such dismantling risks re-introducing the anxiety that perfect cure promised to remove. By suggesting that exercise can have negative consequences, if not gone about in a healthy manner or overindulged in, those who rely on it to regulate their health, moods, appearances, or social status are suddenly faced with a threat – the saving grace to which they cling in order to alleviate (the) suffering (of being at a disadvantage) is suddenly shown as impure. Thus their efforts may be in vain and, by engaging in exercise, they may realize that they are just as vulnerable as everyone else they assumed they were better than.

Of course, exercise in and of itself is not a bad thing. It confers a host of mental and physical benefits, when pursued in moderation. There is nothing inherently wrong with challenging one’s body or pushing it to its limits on occasion. But the notion that exercise is all good, all the time, is misguided. And the pressure felt both by exercise addicts in an extreme version and also experienced on a smaller scale by those exposed to fitness advertising and gym culture (which often embodies the extreme attitudes towards exercise) can incline all of us to make unhealthy choices which risk undermining our mental and physical wellbeing in the long run.

A Healthy Attitude Towards Exercise

The desirability of exercise and fitness are, despite prevalent rates of obesity and inactivity in our country, built into our culture. To suggest that one can be too in shape or that what we believe to be the perfect cure comes with its own risks introduces a level of uncertainty that most may feel uncomfortable with.

It can feel easier to reject and deny that which causes us discomfort than to sit with the truth this discomfort enables us to realize. But if we all take a moment to pause and listen to the truths of people who feel they cannot control their behavior surrounding exercise, and face the facts that extreme exercise does come with consequences and too much can be more than enough, we can use this truth to guide us towards developing a much healthier (read: balanced and realistic) attitude towards physical activity.