When is Distraction a Good Thing?

Distraction has a bad reputation these days. From the hurdles it presents to our productivity to the hindrances it poses to our relationships, a never-present mind has been scientifically proven to throw a wrench in our wellbeing.

When our attention is pulled away from an activity we’re trying to focus on – by a ping or buzz from a smartphone, an overly chatty coworker, or an unexpected noise from outside our window – our stress and frustration levels increase. A 2007 University of Illinois study monitoring the effect of e-mail notifications on computer users found that it can take up to 25 minutes for people to refocus on the task they were pulled away from.

Interruptions from others aren’t the only culprit. As anyone who’s opened Facebook on autopilot in the middle of composing an important work e-mail – or grabbed their phone to check their texts in the middle of reading a book or studying – knows getting back to what you were doing before you jolted yourself out of the moment is also disruptive. One study even found so-called self-interruptions to be more disruptive than non-self-generated ones. 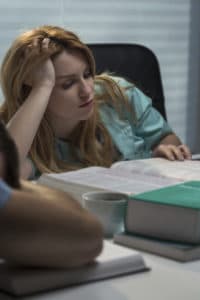 Considering that the average person checks their phone approximately 40 times a day, open-offices are a standard workplace structure, and that, as of 2008, 62% of American workers rely on the Internet for their jobs, each day offers an abundance of distractions that add up — and take a toll.

A study conducted in 2010 by Harvard University researchers Matthew A. Killingsworth and Daniel T. Gilbert found that, out of 5,000 participants who reported their emotions and levels of engrossment in various activities via a smartphone app, those who were happiest were those whose focus was on the present – leading the researchers to conclude that a non-wandering mind is a happier mind, corroborating additional research that our emotional wellness tends to be highest when we live in the moment.

Other studies show that the growing number of distractions in our everyday environment can get in the way of our ability to relate to (and feel satisfied with) important people in our lives. And yet distraction is one of several fundamental strategies suggested by behavioral health experts to help people overcome their dependence on substances or self-destructive activities as well as help manage emotional and physical pain.

So is distraction always such a bad guy? The truth is a little more complicated.

The Truth About Distraction

Consider the classic Mischel’s Marshmallow experiment, in which children were left alone in a room with a delicious marshmallow. All were told that if they refrained from devouring the treat for however long it took a researcher to return to the room, they would receive two or more marshmallows. Many gave in, but some succeeded in exercising their willpower long enough to receive the larger – but farther-in-the-future – reward.

How did the latter group withstand temptation? Primarily, Mischel reflects in his book The Marshmallow Experiment:

“…by inventing imaginative, fun distractions that took the struggle out of willpower: they composed little songs…made funny and grotesque faces, picked their noses, cleaned their ear canals and toyed with what they discovered there, and created games with their hands and feet, playing their toes as if they were piano keys.”

In this instance, distraction was advantageous because it was in the service of pursuing a greater, longer-term reward and shoring up willpower. Further studies by Roy Baumeister and colleagues went on to confirm that we experience a boost in self-control during unenjoyable experiences (like holding a weight up for an extended amount of time) if we draw our attention to something else (or, as participants in the experiment were instructed to do, count the number of stars on a piece of paper in front of them).

Artfully deployed, self-distraction is particularly effective in staying sober or refraining from engaging in an activity we want to avoid. In one study comparing techniques to curb alcohol cravings and urge-related distress in heavy drinkers, distraction was found to trump mindfulness in doing the trick.

Yes, mindfulness and being present are essential to wellbeing. But so, too, is knowing when to get our minds off of a moment. If you’re struggling to stay sober or you find it difficult to resist desires to engage in self-destructive behaviors, take a moment to stop what you’re doing and start brainstorming a list of your favorite distractions.

Crossword puzzles, funny internet memes, taking a walk, going to the gym, calling a friend, re-organizing your desk drawer, or planning a vacation are just starters for how to refocus the mind when it’s locked into an addictive cycle. Merely thinking about what you might do to distract yourself may offer your mind the relief it needs to get through a moment of craving and allow the urge to pass – so you can return to the things you want to be doing: among them, ensuring addiction no longer rules your life.