The CDC and health officials in at least a dozen states are studying a mysterious new lung disease likely caused by vaping. Many victims are quite young, reflecting the recent widespread use of e-cigarettes among middle schoolers and high school students. About four million school kids report vaping in the last month. So far the number of identified cases is quite small- fewer than 100- but the pattern and severity are worrying enough to trigger public health concern and an immediate tightening of laws covering dangerous e-cig contents and the remarkably unscrupulous marketing practices of e-cigarette companies

Differential diagnosis is difficult because the initial symptoms are non-specific (fever, cough, shortness of breath, chest pain) and can be caused by many other illnesses. Doctors were tipped off to vaping as a risk factor by a clustering of cases in which lung disease did not respond to usual antibiotic and oxygen support measures. Many of the victims have been hospitalized, some on ventilators or in intensive care. Deterioration progressed rapidly and responded only to steroids. All the victims had been vaping a wide variety of different substances.The ultimate prognosis and the percentage of vapers who develop lung disease are unknown. Vaping as the cause must be confirmed and the mechanism(s) of toxicity established. It is still very early days. But the alarm is out and deserves careful attention from clinicians, parents, vapers, researchers, government health authorities, regulators, and politicians. 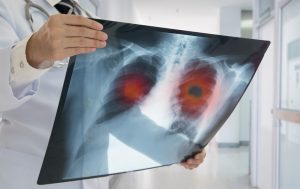 Diacetyl is a very simple organic molecule produced naturally in the making of dairy products and in the fermentation of alcohol. It is what gives butter its flavor and what makes margarine taste like butter.

Eating or drinking diacetyl is completely safe and something all of us do every day.  The problem comes from breathing it.

When heated to high temperatures diacetyl vaporizes. When inhaled its vapor can be very toxic to lung tissue. The CDC has instituted safety regulations and recommendations to reduce the risk of “pop-corn lung”.

There is no smoking gun connecting diacetyl to the lung damage sometimes caused by vaping, but it certainly must be considered a prime suspect. The numerous candy-like e-cigarette flavorings used to seduce young kids all contain diacetyl. The temperatures achieved in vaping are sufficient to vaporize it. And the developing lungs of young vapers may be especially vulnerable.

It seems clear that flavored e-cigarettes should be banned outright and that a minimum vaping age must be established and enforced.

When vaping first became technically feasible twenty years ago, I thought its delivery system providing nicotine without tars might be a relatively safe way to reduce the lethal cancers and heart diseases caused by smoking. Vaping still has this useful indication for smokers who can’t stop smoking any other way.

But the benefits of vaping are rapidly being overtaken by its risks. I did not at all foresee the aggressive and unscrupulous marketing of e-cigarettes, particularly to very young kids in middle and high schools. This has created a new generation likely to graduate soon to vaping hard drugs. I have predicted a future spike of addictions and overdose deaths because vaping is likely to soon become a major vehicle of drug use. 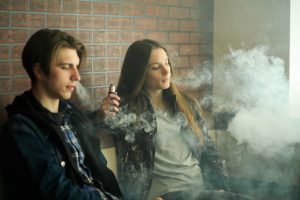 And now we learn that vaping can cause severe lung disease. It is too early to tell how common this will be and how severe. The number of cases so far are few, but the period of exposure for the millions who are vaping has been short. It took decades to prove the connection between smoking and death. Millions of people died unnecessarily in the interim.

Caution is the best part of wisdom. At this point, the risks/benefits of vaping add up favorably only for smokers- where it can be a lesser evil. For everyone else, vaping is a dangerous temptation likely to lead to little good, much harm.

Don’t believe their propaganda. It is no more trustworthy than the lies of Big Tobacco about smoking and Big Pharma about the safety of opioids. Do be alert to the risks of vaping and spread the word to others.