Understanding the Binge Cycle: The Role of Dieting

In order to modify a problem with binge eating, it is important to first understand the cycle and biological mechanisms that maintain binge eating behavior.

Fairburn, the author of the most successful treatment to date for Binge Eating and Bulimia (CBT-E; Fairburn, 2008) posits that basing one’s self-worth on shape and weight, or the ability to control these, leads to dieting behavior.

While many diet companies would have us believe otherwise, dieting is not something our bodies are designed to do. Like the other four basic needs – water, sleep, air, and warmth – food is a primary need without which humans cannot survive.

The History of Binge Eating

Our bodies evolved in an environment in which food was relatively scarce. To survive in such an environment, our bodies had to prioritize the consumption of food above other activities. If our food supply was less secure, we learned to stock up on food when we could. It is a behavior that ensured our species’ survival. Bingeing was not a matter of poor willpower, but a perfectly normal and healthy body response to starvation. Most people who didn’t “binge” when a rare animal wondered into their territory didn’t survive.

When any of our five basic needs is unmet, several things happen. First, we usually become irritable and solely focused on trying to get that need met, even to the exclusion of other activities. We may also have poor concentration for other activities.

Bingeing was not a matter of poor willpower, but a perfectly normal and healthy body response to starvation.-Lauren Muhlheim

A recent study reported in the Mail Online analyzed the behavior of female dieters. Here are a few interesting facts from the study:

Another study reported in the New York Times Magazine showed that when blood glucose is low (such as when a person has gone several hours without eating) the brain responds more strongly to immediate rewards and “willpower” weakens. As the body uses up glucose it looks for a quick way to replenish the supply, which is exhibited as a craving for sugar.

A now famous Minnesota Starvation Experiment put several young men on restriction diets for six months. During the restriction phase, the men exhibited behaviors that indicated a preoccupation with food, including collecting cookbooks, recipes, and cooking utensils. During both the dieting and re-feeding phases there were reports of binge eating among participants.

Together these studies show that binge eating is a powerfully driven biological response to restriction. 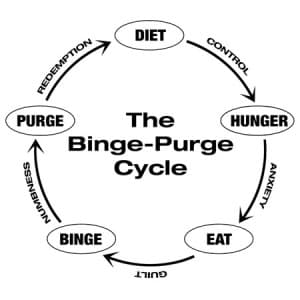 Binge eating – a rapid ingestion of a large amount of food, usually with a loss of control during the eating – in turn leads to feelings of shame, disgust, guilt, self-criticism, and distress. Individuals then resolve to diet again and do an even better job at controlling their shape and weight and eating. Some people may use purging behaviors to try to undo the effects of the binge. Either way, more dieting ensues and the cycle repeats.

What’s Next: This article is the first in a new Pro Talk series by Lauren Muhlheim dedicated to Understanding the Binge Eating Cycle. Upcoming articles will explore broken food and dietary rules, as well as the role of mood intolerance. Check back on Pro Talk.

Fill out the form below if you are an addiction professional interested in contributing content to our Pro Talk platform.

Lauren MuhlheimAUTHORLauren Muhlheim, Psy.D., CEDS is a psychologist who provides evidence-based psychotherapy for adults and adolescents. In graduate school she trained at the Rutgers Eating Disorder Clinic under G. Terence Wilson, Ph.D. who (along with Christopher Fairburn) was instrumental in developing the leading cognitive behavioral protocol for eating disorders. Dr. Muhlheim’s primary focus remains eating disorders and she has treated patients in outpatient settings worldwide, most recently in Shanghai and Los Angeles. She is recognized as a Certified Eating Disorder Specialist (CDES) by the International Association of Eating Disorder Professionals (IAEDP) and is certified in Maudsley (FBT) for adolescent eating disorders by the Training Institute for Child and Adolescent Eating Disorders. She has held various leadership positions within the Academy for Eating Disorders, including co-chair of the AED Social Media Committee. She is currently serving on the AED Board of Directors as Director for Outreach.
Take the next step