Written by: Robert Weiss
Last updated on November 4, 2019
At 5:01 p.m. Mary rushes away from her desk at work, eager to get home so she can check her eHarmony and Match.com profiles. She skips the gym for the umpteenth time, eats a frozen pizza for dinner, and chats obsessively with the men she meets on dating and video chat sites – searching for “the one” until her eyes are so tired that she can hardly see. Mary, obviously, is obsessed with romance. She has read the Fifty Shades trilogy so many times that she’s lost count. She even uses Fifty Shades as justification for her own behaviors. She reasons that if Anastasia could find such a deep romantic intensity with Christian, then she can find the perfect man too. Hence, her endless online search. Plus, her ability to self-soothe with romantic fantasies about Anastasia and Christian (or about herself and whomever it is that she met and fell for that day) is what gets her through her life. It’s her go-to coping mechanism whenever she’s feeling blue. Some people have a glass (or a bottle) of wine; Mary has romance.

Without doubt, healthy romantic love is a beautiful thing. Unfortunately, addictive love is not. In truth, when individuals are preoccupied to the point of obsession with falling and/or being in love, they tend to behave in highly regrettable ways– just like alcoholics, drugs addicts, compulsive gamblers, compulsive spenders, sex addicts, etc. And over time love addicts inevitably experience the same basic consequences: depression, anxiety, lowered self-esteem, ruined relationships, trouble at work or in school, declining physical and/or emotional health, financial woes, loss of interest family, friends, hobbies and other previously enjoyable activities, and more. 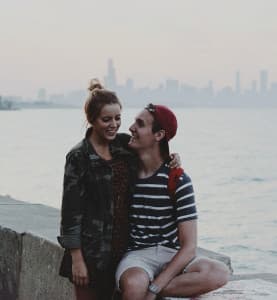 Generally speaking, love addicts are people whose ability to self-regulate, reduce anxiety and remain hopeful about the future rests almost entirely on the neurochemical rush of new romance – that wonderfully exciting time when the other person’s thoughts, actions and very existence are the most important things on earth. In this ephemeral relationship stage the other person seems endlessly fascinating, and his or her character flaws (the things that eventually become bothersome) are easily ignored, mostly thanks to the release of dopamine, along with oxytocin, serotonin, adrenaline and various other endorphins, into the rewards center of the brain. Importantly, this neurochemical reaction matches the neurochemical surge wrought by addictive sexual fantasy/activity and drugs of abuse. So it’s no real surprise that new romance can be just as addictive as sex or cocaine.

…this neurochemical reaction matches the neurochemical surge wrought by addictive sexual fantasy/activity and drugs of abuse. So it’s no real surprise that new romance can be just as addictive as sex or cocaine.-Robert Weiss

It’s important to state that love addicts are not hooked on love. Instead, they’re addicted to limerence (the neurochemical rush of new romance). As time passes, they continually try to extend and/or repeat this early, intensely pleasurable phase of their relationships. What they fail to understand is that limerence (and the neurochemical rush that drives it) are temporary sensations. In short, limerence is not the endgame of healthy relationships, it is the catalyst for longer-term connections, serving as the glue that keeps people interested in one another long enough to potentially form a deeper and more meaningful (albeit less neurochemically intense) desire for intimacy.

Love addicts, rather than sticking with someone and allowing longer-term emotional bonds to form, attempt to perpetually extend the neurochemical excitement of early romance. In essence, their “drug” is the rush they feel whenever they meet someone new who might be “the one.” And they use this drug to get high in the same ways and for the same reasons that alcoholics drink and drug addicts take drugs – to escape from stress and other forms of emotional or sometimes even physical discomfort.

For the most part, the diagnostic criteria for love addiction are the same as with substance addiction. The DSM-5 lists eleven criteria for substance addiction (officially referred to as Substance Use Disorder), any two of which must be present for a diagnosis. And that listing could certainly be adapted for use here. In the interest of brevity, however, I will focus here on the three primary indicators. They are as follows:

Love vs. Sex Addicts
Love addicts sometimes look and act quite a bit like sex addicts – engaging in lots of sex with lots of people. However, love addicts use sex as a tool for hooking and/or holding on to a romantic partner, whereas sex addicts typically do the opposite, using the lure of romance to obtain a sexual partner. In short, love addicts are chasing escape and dissociation via romantic fantasy and activity, while sex addicts are chasing escape and dissociation via sexual fantasy and activity.

Typically, love addicts new to treatment and recovery have little to no understanding of their disorder. They are nearly always deeply in denial about their behavior and its consequences. (These issues are common with addicts of all types, not just love addicts.) Rather than recognizing that they are the one common denominator in their many failed relationships, love addicts typically push the blame onto those with whom they’ve been romantically entangled. Essentially, if their inability to find and keep “the one” is someone else’s fault, they needn’t look at and address their own shortcomings.

Sometimes people think that love addiction is an entirely female issue. It is not. Men can be addicted to romance just as easily as women can be addicted to sex. Sometimes men choose to talk about their romantic issues in sexual terms, much as women tend to talk about their sexual issues in romantic terms. This is simply a cultural norm, mostly a reaction to the general societal acceptance (and celebration) of male but not female sexual activity. Regardless, men absolutely can be love addicts.

I married my high school sweetheart right out of high school because I got her pregnant. I do care about her, but I was never satisfied with just her. I seem to need more than just one relationship. On the day we got married, I actually had more feelings for her maid of honor than for her. And it’s been like that ever since. I’m with my wife, but I’m constantly falling in love with some other woman. Once I got hookup apps on my smartphone, especially Ashley Madison, things really spiraled out of control. Nowadays, I’m never not having an affair. I just spin from one woman to another, and I almost completely ignore my wife. I promise myself I’m going to be faithful, but then I meet a new woman and it feels so right and I’m off to the races again.

Regardless of gender, romance addicted individuals typically engage in one or more of the following behaviors.

Like other addicts, love addicts typically experienced some form of significant trauma when they were young. Common traumas include neglect, abandonment, inconsistent parenting, and emotional, physical, psychological and/or sexual abuse (including covert incest), among others. Regardless of the nature of early-life trauma, love addicts typically learn early in their lives that becoming vulnerable in an attempt to bond in healthy ways is dangerous and to be avoided at all costs. They also learn that escaping into the intense and highly distracting neurochemical surge of limerence is an effective way to “not feel” their emotional discomfort (shame, fear, loneliness, depression, anxiety, etc.). Even a mere fantasy about how perfect life will be with “the one” is enough to create the desired dissociation from life in the moment. So we see that love addiction, like all other addictions, is less about feeling good and more about feeling less (or at least controlling what one feels).

…love addiction, like all other addictions, is less about feeling good and more about feeling less (or at least controlling what one feels).-Robert Weiss

Treatment for love addiction generally relies on the same strategies that work with other forms of addiction. Typically, treatment involves a highly directive form of individual and/or group psychotherapy – most often cognitive behavioral therapy (CBT) – coupled with 12-step recovery (usually Sex and Love Addicts Anonymous) or some other love addiction-focused support group.

Much of the time, love addicts who enter treatment and recovery want to know if they’re going to have to be alone for the rest of their lives. Happily, this is not the case. Yes, sobriety for substance abuse and various other addictive disorders typically means long-term abstinence, but love addiction (and sexual addiction, for that matter) are treated more like an eating disorder, where long-term abstinence is not feasible. Rather than eliminating romantic relationships entirely, love addicts heal by learning to develop and maintain healthy, non-compulsive romantic relationships that move beyond the rush of limerence into much more meaningful and longer-lasting (though much less neurochemically intense) forms of intimacy and emotional connection.