The Undeniable Link Between Problematic Alcohol Use and Traumatic Brain Injury

“When did you have your first concussion?”

“How did you know?” Allison asked in surprise.

“Because almost all of us have had brain injuries,” I replied.

Allison had been hiking in the mountains of the Northwest – one of her favorite healthy hobbies – when she was hit by a cyclist who fled the scene. She lost consciousness and remained on the ground until other hikers happened along the train and found her. They called 911 and she was airlifted to a hospital where she got excellent care, but she reports she has “never been the same since,” and it was only after the injury that her drinking spiraled out of control.

I interview hundreds of people about their experiences with problematic alcohol use in my work for Harm Reduction, Abstinence and Moderation Support (HAMS). HAMS is an organization that does not require abstinence from alcohol, but supports all goals toward safer drinking, including moderation and reducing the damage from alcohol consumption (such as drinking only at home, versus drinking and driving). I was beginning to learn from our members’ lived experiences exactly what I’d read about in the scientific literature: traumatic brain injuries make addiction more likely and recovery more difficult. 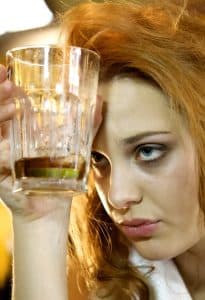 Many drinkers sustain traumatic brain injuries while drinking – the term “falling down drunk” didn’t come out of nowhere! Many of the people I interviewed got their first brain injuries long before they began to drink problematically (or drink at all). Many of the men I met through HAMS and other fellowships sustained concussions while playing contact sports such as football, soccer and hockey as children, long before the awareness of long-term brain damage began to seep into the public consciousness.

One woman I spoke with was married to a man who, despite being 14 years’ sober, had been a dangerous drinker for over twenty years. He started drinking in his early teens after suffering a third sports-related concussion.

The women’s stories were often sadder. Many had gotten their first brain injuries from domestic violence. I interviewed a woman whose ex-husband pushed her down the stairs. She lost consciousness, woke up with her head bleeding on the hardwood steps and a huge black eye. Her husband wouldn’t let her go to the emergency room because the evidence of his crime would be too obvious.

Her drinking escalated quickly after that, undoubtedly due – at least in part – to the stress of living in such a dangerous home situation. However, she reported an increased sensitivity to alcohol and a stronger effect on her cognitive functions than before.  The Brain Injury Association of America reports these effects as common in its helpful fact sheet on brain injuries and alcohol.

When TBI and Addiction are Overlooked

All too frequently, medical professionals and patients alike overlook the connection between traumatic brain injury and addiction. Rarely are the emergency room patients seen for head injuries informed that drinking alcohol is likely to slow their rate of healing or that they may become more prone to addiction. People who sustain concussions while drinking are often fearful of seeking medical attention, as they are frequently treated with stigma and even forced into locked-down detoxes without ways to contact family, friends or employers – or make provisions for child or pet care.

One woman I spoke with sustained her first concussion while stone cold sober. She was taken the emergency room of an urban Northeastern hospital after an ex-boyfriend called emergency medical services and reported she was suicidal. In reality, she was not suicidal – she’d left him a despairing message the night before while drinking, but had not had a drink in over eight hours by the time EMS banged on her door. Though she presented with a low blood alcohol level, was rational, and insisted she was not thinking of harming herself or others, the hospital staff (after running her insurance information and finding out it paid well) told her she had to sign in for an inpatient detox or they would strap her to the stretcher until someone came to forcibly commit her. She was not allowed to phone family or friends.

After signing in, she was heavily medicated with Librium, a powerful benzodiazepine. As a result, she passed out and hit her head against the metal hospital bed frame. She had a giant black eye, but was not given any medical care for the head injury. Rather, she spent four days in confusion and terror, unable to have a private conversation with her family members, as all phone calls had to be made from a phone at the nurses’ station. After this incident, her drinking escalated…as did her panic attacks. Additionally, her cognitive function declined to the point where she had to leave her six-figure job.

The Struggle is Real 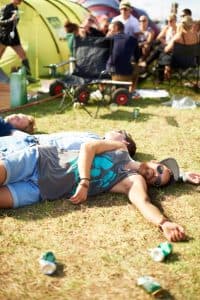 These stories may sound far-fetched, but as I researched in this area and spoke with hundreds of people who have struggled with alcohol use disorders, I find them to be more common than not. According to the Brain Injury Association of America, survivors of traumatic brain injuries (TBI) are at three to eight times higher risk of sustaining another brain injury, and alcohol use makes this more likely because it affects balance, motor skills and decision making. TBI also makes seizures more likely, a serious concern for anyone whose alcohol use leaves them at risk of withdrawal seizures.

Since TBIs are usually not recognized as the serious medical conditions they are, people often fail to get adequate treatment or accommodation within the workplace. Complete brain rest has historically been recommended for the first few days after a concussion, especially rest from screen time. Tasks like working on spreadsheets or emailing updates to supervisors can be almost impossible for people with acute TBIs – and these things can actually slow healing. However, most employers are unaware of the long-term damage to employee productivity caused by inadequate healing time. One woman I interviewed reported that, after she sustained a severe concussion, her employer actually walked her to the emergency department where she worked. Once there, she was told by the attending physician to take at least two – preferably four – days of complete brain rest from screen time, texting, even reading books. New to the job, she hadn’t acquired any paid time off yet, and she was disciplined for taking the two days off ordered by her doctor – at the hospital where she worked!

Alcohol use can both increase the risk of TBIs and make healing more difficult and prolonged.  TBIs also appear to increase sensitivity to alcohol.  Since they affect cognitive function, concussions and other TBIs can make it more difficult to employ techniques like Cognitive Behavioral Therapy (the cornerstone of the SMART Recovery program and many other non-12 Step approaches to addiction recovery) that many people find helpful in their recovery from alcohol and other drug use problems.  According to the Brain Injury Association of America, depression is 8 times more common in the first year after a traumatic brain injury, which can also easily lead to increased dependence on alcohol.

Is There a Safe Level of Alcohol Consumption?

Is there a level of alcohol consumption that is considered “safe” for survivors of traumatic brain injuries? Particularly in the early stages of brain healing, alcohol use is strongly discouraged. However, the Brain Injury Association of America recommends harm reduction measures that sound familiar to those in the harm reduction community, particularly for those who do not wish to or are not able to eliminate alcohol entirely. Their suggestions include drinking only with food, sipping drinks slowly and limiting them to no more than one per hour, taking vitamins B1 (thiamine), vitamin B12 and folate to reduce alcohol-related brain damage, and taking some time off from drinking…even if you do not plan to quit forever.

The good news is that the brain is an incredibly resilient organ, and due to a phenomenon called neuroplasticity, it can create new connections where old ones were damaged. With proper care, including avoiding or minimizing alcohol use, our brains can recover from traumatic injuries just as we recover from the damage we sustained from years of drinking or using other drugs.

Kate, a survivor of at least two concussions – both of which went without adequate medical attention – said, “Within a few weeks after I stopped drinking, I was able to do things that seemed impossible since my second concussion. I could manage my finances and handle my grad school work again. Even things like remembering to wash my face, then shampoo my hair, then use the soap in the shower – in that order – started to come back to me.”

My hope is that, by learning about the impact of traumatic brain injuries on addiction, survivors will be better equipped to recover both from the injury and addiction. I also hope that family members, friends and employers will be able to better understand that the addicted person is suffering from a severe injury, instead of saying they are just weak-willed or they lack the desire to recover. Rest, self-care, proper medical attention and community support can heal.