The Role of Stress in Addiction

It is a biological fact that we are hardwired to find pleasure, satisfaction and fulfillment, or PSF. It is one of our innate drives, which means that finding PSF is a normal function for human beings. This is a quest for normalcy, which is always a significant motivation within addiction – to ‘feel’ normal.

In the case where we do not find PSF, our brain will insist and force us to seek this biological imperative by other means – sometimes with substance abuse. The intensity of this drive grows in relation to the absence of PSF, especially when stress, anxiety and pain become dominant life experiences. Said another way, we don’t find addiction with a person who experiences adequate pleasure in their life, is meaningfully fulfilled and satisfied, and has low stress.

Stress is experienced because the hormones cortisol, adrenaline and norepinephrine are released into our brain and body in significant amounts. The ‘fight or flight’ response is the classic example. If these hormones are not present, human beings do not experience stress because the combination is what produces the stress and anxiety experience at the cellular level.

Brain dominance determines our thinking, emotions and behavior. Stress that is overwhelming, ongoing and oppressive (SOOO) helps to ignite DSB and becomes a quasi-solution in finding a surrogate and temporary form of PSF, but only to the lower brain and at great cost. 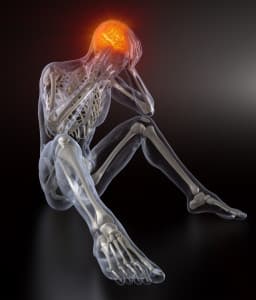 The first role of stress in addiction is that it creates a constant brain bias, with the lower brain as dominant. The higher brain, also known as the Pre-Frontal Cortex, has the crucial role of discernment and higher thinking, and it has the ‘abort button,’ which stops us from wrong behavior. Evidence suggests that the higher brain does not possess drug-seeking behavior. The lower brain is a middle region, including the limbic system, and it serves us when danger is near with the ‘fight or flight’ response. It also possesses long-term memory, or trauma, and primitive emotions. As a result, when the lower brain becomes dominant, it’s a case of the ‘monkeys ruling the zoo’ inside our brain.

The respiratory rate, or speed of breathing per minute, is the first level for measuring stress physiology. High pain, for example, is well studied to evoke fast breathing or hyperventilation. Higher breathing rates are clinically connected with each of the four symptom groups listed below.

All of the main stress indicators associated with addiction hinge on the delivery of oxygen – in particular, to the brain. If we look at what happens when oxygen delivery is impaired, we find increases in the above stress indicators and a trail of breathing physiology gone wrong. Before I go any further, the reader should understand the very unforgiving nature of our breathing physiology. It has a set of laws that, when violated, evokes immediate, negative reactions. For example, we know that poor breathing causes body pain and sleep disturbances.

A clinical focus on measuring, understanding and treating breathing physiology in the recovery environment is a direct approach to treating the chronic stress that is a major trigger of addiction as well as an obstacle in recovery. Stress reactivity, episodic stress and overall stress states are malleable through breathing re-training. And, because improved oxygen delivery is achieved, the brain becomes dramatically more effective in maximizing the benefits from other treatment modalities. In so doing, a new hope for recovery emerges.

What’s Next: Check back for the next article in David Rubenstein’s ongoing series, A New Hope for Recovery, on Pro Talk.

David RubensteinAUTHORDr. Rubenstein is a human health innovator. He has developed a safe and reliable system of health transformation called The Rubenstein Method that reverses a myriad of stress types within the body and brain. Dr. Rubenstein provides engaging lectures and talks to clinicians, administrators and patients. He explains and demonstrates why his first treatment is always to the breathing system and the jaw due to their global impacts to the body and brain stress states. In 20 minutes a 50-70% reduction in stress and mental clarity improvement are typical. He also describes in clear terms why the treatment of specific body regions has a higher priority than others, due to their prominent effects on the brain/body and therefore toward recovery. If you can get ahead-of-the-curve in chronic stress, recovery is more attainable. Specifically, stress that is overwhelming, ongoing, and oppressive (S.O.O.O.) is reversible. Dr. Rubenstein views negative stress as a causal element in addiction and has developed a ‘Stress Index’ which is both a means to measure stress indicators and a predictor of the likelihood of success in the recovery process. By directly treating the physiological markers of stress, a way forward is realized that brings new hope for the recovery world. The completely natural, yet scientific restoration of a calm and clear mind permits the experience of ‘being present.’ That state improves the effects of other recovery methodologies such as cognitive therapy and decreases time and effort to recovery milestones. Dr. Rubenstein places addiction and recovery into a framework of physiology and uses its laws and his more than 300 techniques to improve recovery. The same system has been independently tested to have an effect on chronic pain four times the national average as compared to other modalities. The relief of S.O.O.O. and body pain leads to improved sleep.
Take the next step