Is There Any Amount Of Alcohol That’s Okay To Consume During Pregnancy?

Many of us have been taught that the consumption of alcohol during pregnancy poses myriad risks to a developing fetus. According to the Centers for Disease Control and Prevention (CDC), drinking while pregnant can result in miscarriage, stillbirth, and can increase a baby’s risk of birth defects, developmental delays, or lifelong behavioral, physical and intellectual disabilities.

But just how much alcohol during pregnancy is required to cause these potentially adverse outcomes? And is the advice doled out by virtually all public health institutions in America (the CDC, Surgeon General, National Institutes of Health, Indian Health Service, Maternal and Child Health Bureau, American Academy of Pediatrics, American College of Obstetricians and Gynecologists, to name just a few) and most American doctors that women should completely eschew alcohol for the entirety of their pregnancies based on solid evidence? Or is this guidance an overly cautious attempt to curtail adverse outcomes that lacks a substantial scientific consensus? 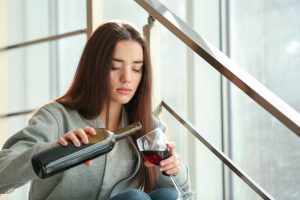 What We Know About Drinking During Pregnancy

It’s clear from decades of research that binge drinking—that is, four or more servings of alcohol at a time, five or more times per month—significantly increases a woman’s risk of bearing a child with any of several fetal alcohol spectrum disorders (or FASDs). FASDs refer to a broad range of conditions seen in infants and children who were exposed to alcohol in the womb. They encompass physical abnormalities and disabilities, emotional and behavioral problems, and cognitive and intellectual deficits.

Women who drink at such excessive levels one or more times during the second or third trimester have been found across numerous studies to be more likely to bear offspring with language delays. There is evidence that excessive alcohol consumption during pregnancy alters babies’ expression of genes that regulate circadian rhythms and stress reactions. Excessive drinking in the first trimester increases the likelihood of offspring physical deformities, like a very thin upper lip (“thin vermillion border”), no ridges of flesh between the nose and upper lip (“smooth philtrum”), an abnormally small head (microcephaly), and reduced birth weight.

Intriguingly, the above birth defects appeared, in one study of nearly 1,000 moms and their babies, to be more likely among expecting moms who drank during the latter half of the first trimester, as opposed to the first 6 weeks following conception. The researchers (led by University of California, San Diego’s Haruna Sawada Feldman) attributed the lower likelihood of alcohol interfering with development during this initial 6 weeks of pregnancy to the fact that, during this time, a fertilized egg is still morphing into an embryo and implanting in the uterine wall and the placenta isn’t yet fully functional—so any ethanol in a mother’s bloodstream would presumably be less likely to transfer to the embryo.

Alcohol consumption during the first trimester may also raise some women’s risk of miscarriage. As economist Emily Oster points out in her data-driven book on maternal and fetal health, Expecting Better: Why the Conventional Pregnancy Wisdom Is Wrong–and What You Really Need to Know, while some studies find no compelling evidence suggesting a link between light drinking and miscarriage (only between heavy drinking and this outcome), a 2012 study analyzing 100,000 Danish women’s drinking habits “found that even light drinking (2 or more drinks a week) was associated with an increased risk of miscarriage in the first trimester.” Women who drank 4 or more drinks a week had twice the risk of miscarriage than those who drank none, she adds.

How Alcohol Affects a Fetus

To get to fetal cells in the first place, alcohol must first move through a pregnant woman’s digestive system, where the alcohol is absorbed via epithelial cells in the stomach and small intestine, into the bloodstream. Mom feels alcohol’s effects as the substance crosses her blood-brain barrier and binds to receptors for gamma-aminobutyric acid (GABA) and glutamate, and reduces firing between neurons in her brain. The fetus is subjected to alcohol’s effects thanks to the ease with which the substance ease diffuse across the placenta and into the fetal blood supply.

Mom can usually metabolize the alcohol from one drink within one to two hours, thanks primarily to two enzymes that break the substance down: Alcohol dehydrogenase (ADH), which converts alcohol to a toxic and carcinogenic byproduct called acetaldehyde, and aldehyde dehydrogenase (ALDH), which further breaks down acetaldehyde into acetate. (From here acetate is broken into ketone bodies, amino acids, and steroids, which can each be utilized in additional cellular and metabolic functions.) Most alcohol metabolism occurs in the liver. But ADH and ALDH enzymes also exist in smaller concentrations inside the pancreas, stomach, and brain. 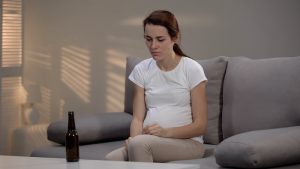 Alcohol can damage cells in several ways. It can interfere with how genes are transcribed and translated during the cycle of cellular growth and division, thereby inhibiting cell growth—especially the growth of brain cells, or neurons.  It can impair other cellular processes, like the synthesis of ATP (the main energy source for most cellular functions), and trigger cell death (or apoptosis). And its metabolism increases the concentration of reactive oxygen species (or ROS—a.k.a. free radicals) within cells that can further damage structural components of cells as well as DNA.

It is this potential damage wrought by alcohol upon cells that’s thought to account for why mothers who drink excessively during pregnancy face a higher risk of bearing offspring with physical, intellectual, or behavioral problems. Alcohol’s ability to kill off and damage cells can greatly impair the developing nervous systems of babies, risking mild to severe brain damage and physical deformity.

[Continue reading. Part II: How Much Alcohol Is Too Much During Pregnancy?]