How Relationships Regulate Our Nervous System

Who you spend time with can have a significant impact on your health, your happiness, and your ability to pursue and meet personal goals. You may already know this, but sometimes when we’re deeply embedded within a friend group, family system, or workplace culture, we don’t think to question whether the dynamics of these groups have a net positive or net negative effect on us.

Researchers have known for over a decade now that a lack of social ties can take a detrimental bite out of our wellbeing. Social isolation has been linked to an increased risk of mortality as well as an elevated susceptibility to cardiovascular disease, illness, and cognitive decline.

But being around people doesn’t necessarily improve these risk factors if such people are uncivil or abusive. Childhood abuse has been linked to physical illness in adulthood. Interpersonal conflict has been shown to exacerbate (if not initially cause) insomnia. And constant arguments with family members may increase our risk of premature death.

The health of our relationships makes all the difference in how healthy we are, overall. Several theories abound as to how interpersonal connections alter not just our emotional wellbeing but also our physical health. One focuses on the role played by the nervous system in responding to social cues such as eye contact, touch, interpersonal warmth, and tone of voice.

A key player in the body and brain’s interpretation of and response to social experiences is the vagus nerve – the longest cranial nerve with the most expansive reach in the body. As Dr. Stephen W. Porges, Ph.D., explains in a 2009 paper published in Cleveland Clinic Journal of Medicine, mammals possess both a myelinated vagus and an unmyelinated vagus, meaning that the former is swaddled in a fatty coating that allows impulses to travel more swiftly along its length. (Reptiles and other vertebrates only have an unmyelinated vagus, giving Porges cause to believe that the myelinated version evolved to serve higher order functions, such as social interaction.) 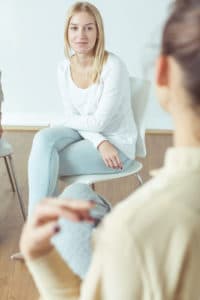 “The myelinated vagus,” Porges writes, “serves to foster calm behavioral states by inhibiting sympathetic influences to the heart and dampening the hypothalamic-pituitary-adrenal (HPA) axis.” (The sympathetic influence and HPA axis Porges speaks of are the key players in the body’s fight or flight response, which gets triggered in response to stress.)

Positive social cues (think: smiles, warm eye contact, kind vocal tones, or an overall non-threatening manner) activate brain structures that stimulate the myelinated vagus. The myelinated vagus then cues the parasympathetic nervous system (responsible for our body’s relaxation response) to ease into gear. End result? Stress and fear evaporate, you calm down, and a sense of comfort washes over you.

Negative social interactions, by contrast, trigger the body’s sympathetic nervous system as the brain perceives them as unwelcome stressors. Absent the more soothing social input that would allow the vagus nerve to coordinate calming down, verbal attacks, menacing glares, criticism, and any other type of painful social feedback kicks off an increase in heart rate, quickened breath, and agitation (among other physiological fight/flight responses). Rather than relaxing into a moment shared with one or more people, you feel yourself itching to fight or escape from the person or people making you feel ill at ease filter into your awareness. You stop being able to think clearly. You may clam up or shut down emotionally. Your body is reacting to what it perceives as a legitimate danger.

Being on the receiving end of incivility, emotional manipulation, or abuse not only makes us sad, angry, and anxious; it has also been found to impair our creativity and ability to think clearly while marring our motivation, sense of belonging, and willingness to approach other (nicer) people.

Luckily, enough positive interactions with others who are warmer and less hostile can override the detrimental effects of being the target of a disgruntled individual’s abuse. However, if the majority of your social interactions are negative or uncivil, chances are your vagus nerve won’t have a chance to send out all those “let’s chill” signals, since your fight or flight mode (sympathetic nervous system) will be flipped into high gear more often than not.

As it turns out, those who have a history of trauma, abuse, or have a psychiatric diagnosis that impairs their social functioning do indeed exhibit irregularities in the activity of their vagus nerve. Researchers refer to the overall health of your vagus nerve by the term “vagal tone” and measure it by the variation in your heartbeat during a normal breath cycle.

Studies have found that people with post-traumatic stress disorder show a diminished vagal tone while other research has found that individuals with borderline personality disorder (an affliction characterized by unstable moods and impulsive behavior) have a lower resting vagal tone. Low vagal tone has also been associated with deficits in children’s ability to regulate their emotions and their attention.

Need a Vagal Tune Up?

Can poor vagal tone be improved simply by spending time with people who are kind – or supportive? Considering the impact that positive social ties have been shown to have on wellbeing, the answer is most likely yes – though research would need to investigate the direct effect of positive social interactions on vagal tone among those whose vagal tone is on the lower side to begin with before any definitive conclusions can be made.

Some psychologists and other medical and mental health experts believe that engaging in more positive encounters and surrounding ourselves with less energy-draining or negative people holds the key to boosting our energy levels, motivation, and overall happiness. (Amy Banks, M.D., is one of these experts and she wrote a book about how relationships regulate our health via the vagus nerve called Four Ways to Click.)

What scientists do know is that certain therapies which target the vagus nerve – such as yogic breathing exercises as well as direct vagal nerve stimulation (at least, in rats) – can enhance mental health and a sense of social connectedness as well as reduce cravings for addictive substances. So the role of the vagus nerve in improving wellbeing by way of enacting our body’s calmer behaviors and evoking more physiologically relaxed states is clear.

Whether or not the vagus nerve is primarily responsible for how positive and meaningful social connections boost our physical and emotional health still needs to be further investigated. But we can all try to be our own test subjects by tracking how we feel around certain people and making an effort to spend more time with those in whose presence we feel calmer, safer, and happier. Chances are, the more vagus-nerve stimulating encounters we can slot into our days, the better we’ll feel – and the less triggered we’ll be to engage in addictive and otherwise self-destructive behaviors.