The three absolute certainties in life are death, taxes, and unintended consequences, all of which are generally viewed negatively. And all of which are, strangely enough, related to cigarettes.

Luckily for smokers, the relatively new development of electronic cigarettes has offered many a road to reducing smoking habits, and even quitting. But, helping to solve this one addiction problem has created another new and unforeseen one.

The FDA is now stuck on the horns of a dilemma. Should it be permissive about e-cigarettes because they save smokers’ lives? Or 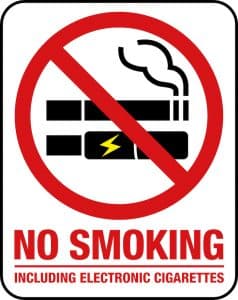 should it regulate them tightly, or forbid them altogether, to prevent what is a rapidly growing teenage vaping epidemic?

On one side are opponents of vaping — public health authorities, parents, school officials, and doctors — who decry the surge of nicotine addiction in youngsters and worry that it will serve as a gateway to their later smoking tar laden cigarettes.

On the other side are the champions of vaping — a collection of odd bedfellows: ex-smokers who have found vaping to be their only effective aid to reducing cigarette consumption, doctors delighted by the decline in health risks occasioned by declining rates of smoking, greedy producers of vaping products intent on saturating the market, and libertarian pundits complaining that any regulation of e-cigarettes  constitutes a “nanny state” violation of individual freedom.

Conservative groups have gotten into the act, joining together recently in a letter to President Trump that complains bitterly and hyperbolically about the FDA’s “aggressive regulatory assault” on e-cigarettes and it’s “regulatory panic and significant government over-reach”. They suggest that Trump “pump the brakes”. Their outburst is wildly exaggerated and seems to be no more than a political strategy to proactively cripple the FDA. Thus far, the FDA head, Scott Gottlieb, has talked very tough, but done very little.

Pros and Cons Of Vaping

Since their invention 15 years ago, the e-cigarette market has grown exponentially, with worldwide sales now already exceeding seven billion dollars.

Some of this commercial success was fully expected and seems worthwhile. The grave health risks inherent in cigarette smoking are almost all caused by inhaling the tars and carbon monoxide in the smoke. Nicotine by itself is similar in its safety profile to caffeine — very addictive but also not very dangerous.

It is ever so much safer to use a vaping vehicle that delivers mostly nicotine, rather than a conventional cigarette with all its attendant tars and carbon monoxide. Although the e-cigarette vapor does contain some noxious chemicals, these are at much lower levels than in tobacco smoke. While the final overall safety profile is not yet in, it seems a no brainer that vaping is far safer than smoking for established smokers.

Vaping is also far more popular than previous nicotine replacements (gum and the patch). Unlike them, it delivers nicotine to the 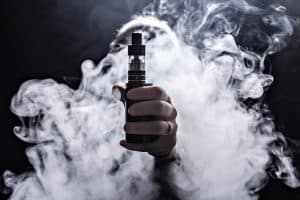 brain extremely quickly and in high enough concentrations to provide a nicotine hit comparable to smoking a cigarette. Although systematic research is sparse, it appears that smokers who take up vaping are more able to quit smoking or reduce the number of cigarettes smoked.

So far, so good. But vaping has the possibly nightmarish dark side of promoting an epidemic of teen addiction. Unscrupulous e-cigarette producers have done all in their creative power to make vaping a ubiquitous rite of passage for American teenagers.

A national survey of 50,000 8th-, 10th-, and 12th-graders conducted by the University of Michigan found that 10% of 8th graders vape and the rate in high school seniors has jumped from 9% to 37% in just the last year.

Elegantly designed vaping paraphernalia is easily available in stores and on the internet. There are a staggering 460 brands and 7700 flavors, most of them catering to the teenage taste for candy, fruits, and deserts. Similar flavoring of cigarettes was prohibited for obvious, good reasons years ago. Smoking is a dirty habit, vaping has become far too cool.

There is obvious risk in massively addicting our next generation of teenagers. We are in the dark about what percentage will grow out of it versus what percentage will grow into smoking or become more readily addicted to other drugs (particularly those that are also inhaled). We can’t predict whether vaping is a temporary teenage fad-du-jour or a serious long term public health problem.

What we do know is that the companies peddling vaping products are ruthless in using clever methods to addict vulnerable teenagers. Their business model and morality mimic those of a drug cartel. The government must not leave parents and kids unprotected from their predatory practices.

Scott Gottlieb fully supports e-cigarettes when they are used to help smokers quit, but is appropriately outraged about the teenage vaping epidemic and harshly condemns the companies that have promoted it: “it’s now clear that widespread and sometimes reckless marketing of these products has come at the expense of addicting a new generation of kids on tobacco.”

Gottlieb has even threatened to order flavored e-cigarettes off the market altogether until their impact can be studied further. But his comments have not been accompanied by decisive action and seem to be no more than an effort to scare the industry toward greater self-regulation and away from the worst excesses of its greedy marketing zeal. The industry is obviously not running scared into voluntary submission and instead is pushing back via pressure on Trump.

So far, the FDA has displayed much more bark than bite; its actual actions have been much less radical than Gottlieb’s jawboning rhetoric would suggest. Current FDA proposals may, if eventually made official, restrict convenience store sales of e-cigarettes, but this would probably be much more a symbolic gesture than a really effective intervention. The cat is probably already well out of the bag, as the Internet is a major supply source that can easily fill any needs frustrated by an impotent ban on convenience store sales.

Navigating the Turbulent World of E-Cigarettes

In my view, e-cigarettes should remain available to adults because they are valuable in smoke-ending and because they are unlikely to promote an epidemic in more mature people. There is evidence that e-cigarettes increase the risk of cardiovascular disease, but overall, they are much safer than conventional cigarettes.

But e-cigarettes should not be available for sale to minors because in this age group they are not much needed for smoke ending and will instead likely serve as a dangerous gateway to smoke starting. For some kids, it will be a small step from vaping nicotine to vaping other drugs like opiates, THC, psychedelics, and synthetics.

Flavored brands should be roundly condemned as a cynical marketing tool to addict teenagers to nicotine– and their production should be banned immediately and altogether. Flavoring also requires the use of chemicals that may cause lung disease.

This simple solution to FDA’s e-cigarette conundrum is perfectly obvious conceptually, but may be impossible to implement politically. Trump’s regulatory priorities always privilege subservience to industry profit and conservative ideology, with indifference to public health and safety.

This will be a test of Scott Gottlieb’s mettle and FDA’s independence from the industries it is meant to regulate. Based on past performance, both will likely fail. Only concerted public pressure can counteract well-funded special interests. Let’s hope concerned parents, teachers, and health professionals will force our politicians to protect our kids.