Are Low-Cal Sweeteners Helpful or Harmful?

Although the jury is out on whether sugar or any other food ingredient is addictive, some people feel they have an addiction-like relationship with sugar and sweet foods. And it’s not uncommon to hear reports of sugar cravings from folks recovering from alcohol and drug addiction, despite lack of a definitive scientific explanation. Some of us (like me) just really like sweets but know it’s not healthy to eat too many so-called empty calorie foods – ones that supply calories but have little nutritional value and can pack on the pounds.

(Although I don’t agree with all of her suggestions and conclusions, Dr. Carolyn Ross discusses weight and eating issues during recovery in a recent Pro Talk article and offers some good nutrition tips.) 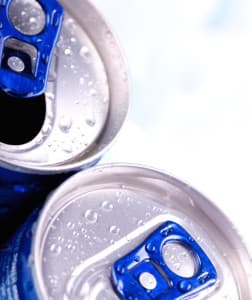 There’s no question that the American diet is too high in so-called “added sugars,” which are sugars and syrups added to foods when they’re prepared or processed – not sugars naturally in fruits and milk. The main sources of added sugars for Americans are regular soft drinks, energy drinks, and sports drinks.

Just released last week, the “Scientific Report of the 2015 Dietary Guidelines Advisory Committee” (to be used as the basis for the new Dietary Guidelines for Americans, scheduled for publication later this year) from a team of 14 nutrition experts issued strong advice that our intake of added sugars should be curtailed to an average of no more than 10 percent of daily total calories, down from the current 13.4 percent. (In children 9 and older through young adults, the number is now from 15 to 17 percent.)

Noting that “the current rates of overweight and obesity are extremely high among children, adolescents, and adults,” the report concludes, “Strong and consistent evidence shows that intake of added sugars from food and/or sugar-sweetened beverages are associated with excess body weight in children and adults.” Consuming less added sugars is associated with weight loss.

Strong and consistent evidence shows that intake of added sugars from food and/or sugar-sweetened beverages are associated with excess body weight in children and adults.-Scientific Report of the 2015 Dietary Guidelines Advisory Committee

So for those of us who want to satisfy a sweet tooth and be mindful of health at the same time, is it safe or possibly beneficial to use sugar substitutes – also known as non-nutritive or intense sweeteners – and foods and beverages containing them? (In the U.S., seven are approved for use by the Food and Drug Administration [FDA], but aspartame is used most commonly.)

Several new reports suggest that low-cal sweeteners are safe when consumed at reasonable levels and may be helpful for weight control, but the reports stop just shy of recommending them as replacements for sugary beverages and foods for long-term weight management. So what’s a consumer to make of this? 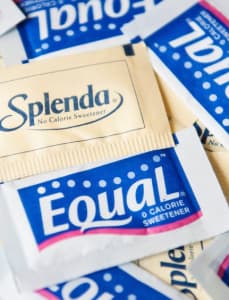 Since the most widely used low-cal sweetener is aspartame, the Dietary Guidelines Advisory Committee chose to review the health-related studies concerning that low-cal sweetener alone. Committee members concurred with an earlier report by the European Food Safety Authority Panel on Food Additives that aspartame in amounts people commonly consume is safe for healthy people and poses minimal health risks unless someone has the rare genetic abnormality called phenylketonuria (PKU). The European safety guidelines are that aspartame intake should be below 40 milligrams per kilogram of body weight per day, equivalent to an adult weighing about 132 pounds drinking at least 12 cans of diet soda (containing the maximum allowable levels of use) every day for the rest of his or her life.

The European safety guidelines are that aspartame intake should be… equivalent to an adult weighing about 132 pounds drinking at least 12 cans of diet soda every day for the rest of his or her life.-Anne Fletcher

(In the United States, the acceptable daily intake is 50 mg/kg/day, and most Americans consume well below that.)

In January, the French Agency for Food, Environmental and Occupational Health & Safety (ANSES) – a nonprofit public authority in France whose mission includes human risk assessment having to do with food – released an assessment of the nutritional benefits and risks related to a variety of low-cal sweeteners, some available here, others not. It concluded, “The available data do not show any risks related to intense sweetener consumption.”

Finally, just this week, the American Academy of Pediatrics released its “Position Statement on Snacks, Sweetened Beverages, Added Sugars, and Schools,” including what I’d consider to be a tentative endorsement of low-cal sweeteners for young people regarding their benefit for long-term weight management. The statement suggested that, although more research on benefits and consequences of long-term use is needed, a number of low-cal sweeteners “have shown good safety over time” and might prove helpful as a tool to replace added sugars and help lower calorie intake.

Despite their safety endorsement for low-cal sweeteners, both the Dietary Guidelines Advisory Committee and ANSES did not recommend replacing added sugars with low-cal sweeteners. They both encouraged water drinking as the preferred beverage, expressing some concern about a recent study suggesting a possible association between aspartame and the risk of non-Hodgkin lymphoma and myeloma in men.

(However, association is not causation and this does not provide evidence of the carcinogenic risk of aspartame. It suggests that more long-term research is needed.)

Help or Hindrance for Weight Control?

When it comes to low-cal sweeteners and weight control, the U.S. Dietary Guidelines Advisory Committee concluded, “Moderate and generally consistent evidence from short-term RCTs [randomized controlled trials] conducted in adults and children supports that replacing sugar-containing sweeteners with low-calorie sweeteners reduces calorie intake, body weight, and adiposity [fatness].” And while some believe that because they’re sweeter than sugar, low-cal sweeteners over stimulate taste receptors, resulting in sweet cravings ultimately leading to overeating and weight gain, the ANSES review of studies suggested that there’s no evidence that use of low-cal sweeteners causes habituation to sweet tastes and an increased appetite for sugary foods.

Once again, neither group recommended replacing added sugars with low-calorie sweeteners, indicating that there is not yet enough research to recommend their use as a strategy for long-term weight loss and maintenance.

Knowing about the so-called obesity epidemic in our country, the advice to cut back on sugar, and that the desire for sweet-tasting foods is innate, I turned to an expert on low-calorie sweeteners to get her take on whether these professional groups are being overly cautious and maybe unrealistic when it comes to everyday people making food choices – not to mention those who have to pay special attention to how much sugar they eat.

Hope Warshaw, is a registered dietitian, certified diabetes educator, and the author of several books published by American Diabetes Association, including her latest, Eat Out Eat Well – The Guide to Eating Healthy in Any Restaurant.

Disclosure
Hope Warshaw is also a consultant to McNeil Nutritionals, LLC, the manufacturer of sucralose-based SPLENDA® Sweetener Products, as Anne Fletcher also once was some time ago.

She said, “I’m baffled by the conclusion that there’s not enough evidence to recommend using low-calorie sweeteners as a strategy for long-term weight loss and weight maintenance, knowing what I know about the research on these sweeteners, obesity, and diabetes. What research are they waiting for? Their recommendation is not reality-based.”

Warshaw pointed to the two “fundamental realities” that the Dietary Guidelines Committee said guided its work: “First, about half of all American adults—117 million individuals—have one or more preventable, chronic diseases, and about two-thirds of U.S. adults—nearly 155 million individuals—are overweight or obese. These conditions have been highly prevalent for more than two decades.” 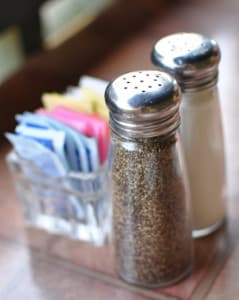 In a recent interview with About.com, Warshaw pointed to a 2014 meta-analysis (analysis of many studies) published in the American Journal of Clinical Nutrition which found that low-cal sweeteners reduced body weight compared to placebo and modestly but significantly reduced body mass index, fat mass, and waist circumference. In an accompanying editorial, James Hill, Ph.D., a respected obesity researcher, stated, “Low-calorie sweeteners seem to be doing exactly what they were designed to do: helping reduce total energy intake while providing the sweet taste we value… You can confidently use this tool without worrying that you might be unintentionally hurting your weight-management efforts.”

Recall that seven low-cal sweeteners have been approved by the FDA, and all are chemically unique. If questions are raised about one of them, they don’t necessarily apply to all.-Anne Fletcher

As for the safety issue Warshaw notes, that the low-cal sweeteners available in the U.S. have been through FDA approval processes and regulatory agencies around the world have approved them, too. “And it’s not like these safety reviews stop after a product is approved,” she added. “Additional safety and efficacy research continues to be done.” She also points out how, based on results of findings from a study (which may or may not be well-done) on one particular low-cal sweetener, the media and even professionals often paint a negative picture of all low-cal sweeteners “with a broad brushstroke.” (Recall that seven low-cal sweeteners have been approved by the FDA, and all are chemically unique. If questions are raised about one of them, they don’t necessarily apply to all.)

As a registered dietitian myself, I agree with Warshaw that low-cal sweeteners are not a magic bullet for weight management but can be one of multiple tools to help with the process.

In an ideal world, we would follow the Dietary Guidelines Advisory Committee’s Advice that “…added sugars should be reduced in the diet and with healthy options, such as water in place of sugar-sweetened beverages.” But when people choose not to do this, I feel that moderate consumption of beverages and foods sweetened with low-calorie sweeteners is preferred over sugary versions. And there’s no reason individuals who make such choices should be frowned upon by self-righteous nutrition aficionados.
Photo Source: istock