A Harm Reductionist Takes a Fresh Look at the 12 Steps

I hadn’t been to an AA meeting in two years. I attend, and even facilitate, several other recovery meetings: SMART Recovery, HAMS (Harm Reduction, Abstinence and Moderation Support) and Refuge Recovery. But after going to a traditional 12-Step rehab, doing my 90 in 90, and faithfully attending AA for six more months or so, I had found it just didn’t resonate with me anymore.

As a harm reductionist, I don’t see abstinence as the only way, and I strongly believe that AA is not for everyone. But when I recently experienced a health crisis, I felt I needed support. Now. I needed the fellowship of others in recovery, a list of sober women I could call anytime, and just a peaceful place to go at night when the feelings of sadness hit and I was lonely in my little one bedroom apartment.

I hit up the AA meeting in the basement of the church on the corner. It had been my favorite. 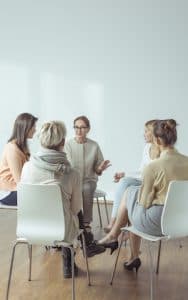 Outside I was greeted by G, who I had known before. He was smoking a cigarette and immediately recognized me. “Hey!” he said warmly. “Great to see you!” When I went into the meeting, many people came up to me and introduced themselves, shook my hand, and welcomed me.

During the meeting, I read the 12 Steps on the wall. I had already memorized them during rehab, so they were not unfamiliar. But as a harm reductionist, I had stopped thinking of them so much. We have other sayings, like in Harm Reduction, Abstinence and Moderation Support, where we say “Better is better!”

Yet, as I read the Steps again on the sign on the wall in that calm church basement where people shared their stories – stories that reminded me that many have come back from situations much more challenging than mine – I began to look at the steps from a harm reductionist perspective. I found myself rephrasing them from the perspective as someone who does not believe I am powerless, who does not believe that character defects caused the alcohol problem that almost killed me, but who recognizes the profound danger that alcohol and other drugs can pose to some people, especially those of us who have suffered from trauma, crisis, or the declining economy. Rarely have I seen a happy person become addicted. People pick up and don’t put down when the pain becomes too much.

My New Version of the 12 Steps

With that revelation, I mentally rewrote the Steps. Here’s what I came up with: