What You Need to Know About GHB

On Sunday, March 16, Charlie Denihan was found dead in his Manhattan apartment from an apparent drug overdose. The heir to the Denihan Hospitality Group was just 28 years old.

Officials found several illegal drugs at the scene that are believed to have caused Denihan’s death: methamphetamine, cocaine, and GHB.

The recent spike in GHB’s recreational popularity has led to more frequent GHB-related overdoses, either taken excessively by itself or with a lethal cocktail of other substances. In light of Denihan’s death, we’re breaking down what you need to know about the dangerous club drug GHB.

Gamma-hydroxybutyric acid (GHB) is naturally present in the human central nervous system, as well as in wine (as a product of fermentation), beef and most other animals, and certain citrus fruits. But when introduced into the system at levels far exceeding what the body produces naturally, GHB serves as a powerful, and often lethal, intoxicant. Unfortunately, the production of GHB is considered by many black-market “chemists” to be one of the easiest illegal substances to make at home. Involving gamma butyrlactone (or “lactone” or short) and lye combined in the proper amount, the relative ease of GHB production has led to its increasing street availability.

At extremely low doses (about 1g of GHB in powder form, usually mixed into a drink), users report feeling relaxed, social, decreased coordination, mild dizziness, and other effects comparable—and often mistaken for—alcohol intoxication. A medium or moderate dose (roughly 1 to 2g and the popular dosage for “clubbers” and “ravers”) reportedly induces increased appreciation for music and dancing; causes extreme slurring of speech and moderate incoherency; pro-sexuality such as increased tactile sensitivity and male erectile capacity; and occasionally nausea and feelings of general unwellness. Heavy doses (2g or more) cause short feelings of intense euphoria before users report feeling disequilibrium to the point of severe illness and vomiting. The after effects of the next day are compared to a mild to severe hangover from alcohol, depending on the amount of GHB ingested the night before. 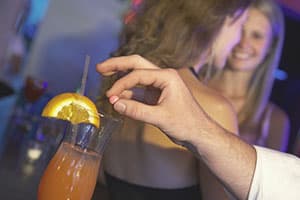 Although pure GHB is described as having a salty taste, it is colorless and odorless, and its mild salty taste can be almost completely masked by alcohol, which makes it easy to put in someone’s drink without them knowing. Because of this, GHB has a long history of being used as a date-rape drug alongside potent benzodiazepines such as flunitrazepam (Rohypnol). Frequently used to facilitate sexual assault, GHB inhibits the elimination rate of alcohol and is processed by the body in such a way as to make it almost impossible to detect in a urine screening any more than eight to twelve hours after its ingestion. However, GHB use can be easily detected using a hair sample.

GHB as a Club Drug

GHB is more frequently used as a “club drug,” defined by frequent use at clubs, raves and parties by teens and young adults. More common club drugs include stimulants (cocaine and crystal meth), inhalants (nitrous oxide and amyl nitrate “poppers”), hallucinogens (LSD and psilocybin mushrooms) and phenethylamines (ecstasy). When taken, GHB is a fast-acting intoxicant amplifying the effects of alcohol intoxication, as well as a stimulant and considered by some to be an aphrodisiac. As such, it has become very common for young people to take GHB recreationally as it is seen to enhance the club or rave experience. This view is echoed in some of the inappropriately affectionate nicknames given to GHB; street names include “liquid ecstasy,” “liquid X” and “lollipops”. At lower and more moderate doses, club-goers and ravers enjoy the mild euphoria and sociability of the drug, which is why GHB has seen more widespread use as a way to enhance the nightlife experience.

GHB in the Media

It is with increasing frequency that reports of GHB overdoses are reported in news and media outlets, seen as a direct result of the now-common use of the substance as a club drug. The body of Charlie Denihan, an Ivy League graduate, was found by his roommate at 7:30pm on March 16 in the apartment they shared in a Union Square high-rise. Within four hours, two other deaths were reported to Manhattan’s 13th Precinct; Jovin Raethz, 37, a well-known fitness trainer from West Hollywood, and Shawn Murphy, 34, also overdosed on GHB. Three deaths caused presumably by the same batch of GHB making its way through Manhattan has prompted an investigation into the source of the drug, as well as whether there have been any other deaths related to the case.

Dane O'LearyAUTHOR
Take the next step