I Left My Addicted Husband…and it Saved Our Lives

When you’re married to an addict, your whole life turns upside down. Chaos naturally accompanies the disease of addiction. What used to be a happy home can quickly take on the appearance of a circus – especially if your spouse is actively abusing drugs.

There’s a wealth of information out there for those looking to help an addicted loved one, but what about helping yourself? What about your feelings, wants and needs?

Janet Howe is all too familiar with the struggles that come with loving a spouse who’s actively abusing drugs. Her husband, Tom, spent the last six years of their 12-year marriage addicted to OxyContin and heroin.

She eventually realized something had to change and that change had to come from within.

Here’s how Janet finally gave herself permission to detach from her husband – and why she says it’s the best decision she ever made.

Q: So, Janet tell me a little bit about your relationship with Tom.

A: Well, I met Tom my junior year of high school. He was part of the “cool” clique I guess you could say; he liked to drink a few beers on the weekend and do a little drag racing here and there. That “danger” is probably what attracted me to him in the first place. We began dating the summer before my senior year and got married three years later.

Q: How and when did Tom develop an addiction?

A: Like so many others, Tom developed an addiction to prescription pain pills after they were prescribed for a legitimate injury. He actually broke his back from falling off a roof. After several surgeries, he could no longer function without a 24-hour supply of OxyContin. He was eventually referred to a pain clinic and, after missing three mandatory pill counts, he was kicked out.

Once he lost that “legal” monthly supply of OxyContin, he started buying them off the street. And that’s when our finances went down the drain. He took every dime we had and spent it on pills. I knew it was bad, but I just didn’t want to admit to myself how bad. I was in denial, you know?

After creditors began threatening to sue and we’d had both our cars repossessed, I took on a second job. Tom was getting a monthly disability check. Combined, we could have probably gotten ourselves out of the financial mess we were in, but he just couldn’t stop buying pills.

I finally got a separate checking account and, without access to my income, Tom could no longer afford to buy OxyContin. That’s when he switched to heroin.

Q: What changes did you see in him once he turned to heroin?

A: Oh, he was so much worse. He would lay around the house nodding out constantly. I can’t count the times I saw him passed out on the couch with drool pouring from his mouth. He stopped eating; he only left the house to go meet his drug dealers. He was literally just a shell of a man. Tom, the person I’d loved for the better part of my life, was now a stranger.

For years, I covered for Tom and cleaned up his messes. I made excuses to his family, my family and all of our friends.-Janet Howe

For years, I covered for Tom and cleaned up his messes. I made excuses to his family, my family and all of our friends. I assured them he was fine and just “felt a little under the weather.” And while I was out there doing damage control, Tom became violent towards me. He never physically struck me; he was just so verbally and emotionally abusive – especially when he couldn’t get any heroin and experienced withdrawals.

I tolerated this for six years; six long, sad years of my life. I had convinced myself that, if I left him, I would be abandoning him. As if his choices were somehow a result of my actions. I didn’t want to give up on him, you know?

Q: What finally made you change your mind about leaving?

A: Believe it or not, I was watching an addiction documentary on TV and felt like it was a mirror image of my life. I knew I had to be strong and put myself first for once. I wanted a better life and, if Tom wasn’t interested in improving our lives as a couple, I had to go.

Don’t get me wrong; I’d done all the research and reached out to counselors beforehand. Tom ultimately entered, and was kicked out of, seven rehab programs. It was an ugly pattern that just kept repeating itself. In the end, I had to give myself permission to leave him in order to save my own life. And that wasn’t an easy choice to make; it was the hardest thing I’ve ever had to do.

Q: So what happened after you left the marriage?

A: I ended up sitting Tom down one night and telling him I was done.

It’s worth pointing out that Tom was high as a kite when I told him I was leaving, so I don’t know if he really understood what I was saying to be honest – and I didn’t care.

I’d threatened to leave him a hundred times before…I just never followed through.

It took him about three days to realize things were different this time. He promised me the sun and moon, just like he always did, but I stood my ground. I refused to go back into that dark and suffocating environment.

About three months after I left Tom, I filed for divorce.

Q: How did you move forward afterward?

A: You know how they say “everything happens for a reason,” well that’s an understatement for me! Once Tom and I split, he was forced to deal with the mess he’d created. I was no longer there cleaning up all the fallout for him – I know now that I was just enabling his addiction. At the time, though, I really thought I was helping him.

Tom voluntarily entered a long-term rehab program that was located seven hours away. Meanwhile, I was doing my own healing. I joined two therapy groups and quickly learned that my situation wasn’t uncommon – not by a long shot. But it was so nice to be able to talk to people that intimately understood what I was going through. That support is worth its weight in gold, let me tell you.

I know now that I was just enabling his addiction. At the time, though, I really thought I was helping him.-Janet Howe

Tom spent nearly six months in a recovery program and transitional sober living house. We spoke once or twice a month; I began to hear flashes of the Tom I used to know. He slowly found a new kind of peace within himself and that gave me comfort. I knew he was going to be okay.

Q: What’s the status of your relationship today and do you have any regrets?

A: Well, if this were a fairy tale, I’d say that Tom and I got back together and lived happily ever after…but this is real life and things didn’t work out that way. In fact, they worked out much better. Tom and I divorced – amicably I might add – and we both moved on. 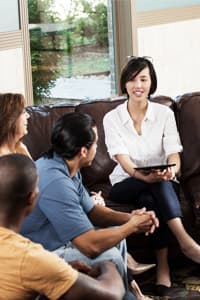 Today he’s sober, healthy and happy. In fact, he’s working as a guide and counselor for a youth wilderness therapy program.

As for me, I’ve learned how to stand on my own and not put the well-being of others’ ahead of my own needs. Today, I am an active participant in building the life I want to live. I’ve learned that it’s okay to detach myself from toxic situations and I’ve set boundaries that define what I will and will not tolerate from others.

Most importantly, I’ve found happiness and peace with my past and the decisions I made. I’m a stronger person for all I’ve experienced and I refuse to waste time lingering in the past. I’ve got too much life to be living to do that!

No regrets; no what ifs.

Learn more about finding the right recovery program for you or a loved one.