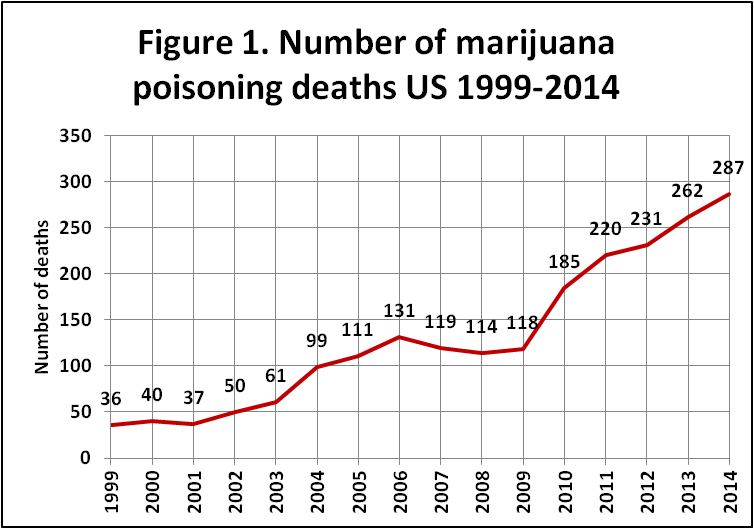 The biggest killers are sedatives (benzodiazepines such as Xanax and Z-drugs such as Ambien), antidepressants, psychostimulants (Ritalin, amphetamine, and methamphetamine), and antipsychotics, in that order, as shown in Figure 2. 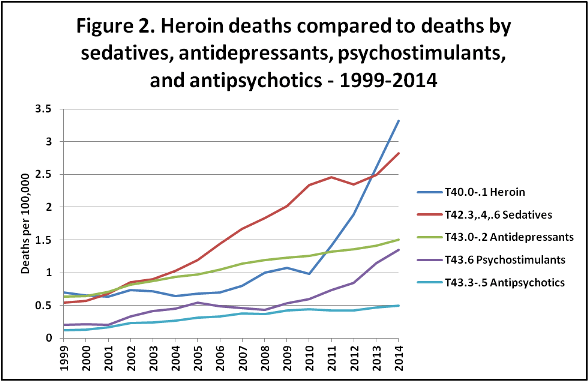 Although medical scholars use the word polypharmacy in several different ways, the simplest definition is “the prescription of two or more drugs at the same time.” In other words, drug mixing. In some cases, such as HIV treatment, polypharmacy is an evidence-based best practice. In other cases, such as psychiatric treatment, there is little research to back up most instances of polypharmacy; moreover, inappropriate polypharmacy can be harmful or even deadly.

“A great deal of data exists about the dangers of polypharmacy. Persons with psychiatric disorders experience increased risk for adverse drug interactions because of the great frequency with which multiple medications are used. Using multiple antipsychotics concomitantly has been associated with increased mortality in patients with schizophrenia. Reports of adverse psychiatric polypharmacy effects are abundant, including increased duration of hospital stay.“

“While evidence for the added benefit of psychiatric polypharmacy is limited, there is growing evidence regarding the increased adverse effects associated with such combinations. Concerns with polypharmacy include not only possibilities of cumulative toxicity and increased vulnerability to adverse events but also adherence issues which emerge with increasing regimen complexity.“

In my personal experience running an alcohol support group, I have had countless women tell me that, despite admitting they were drinking too much, their GPs still prescribed an SSRI antidepressant and, shortly after starting the antidepressant, their alcohol consumption went through the roof. This is not surprising, in light of the fact that research by Naranjo et al. (1995) showed that women treated with SSRIs drank significantly more than women given a placebo; a survey by Graham and Massak (2007) also found antidepressants were useless for reducing drinking in women. Unfortunately, doctors who have been encouraged to write off-label prescriptions frequently jump to the conclusion that women who drink too much must be depressed, so they wind up prescribing an antidepressant that actually makes them drink more. There is a great deal of potential harm which can result from off-label prescribing.

Wouldn’t it be great if there were some way we could permanently change the wiring of the brain to ameliorate or eliminate things like depression, anxiety, and schizophrenia without a lifetime reliance on potentially deadly drugs? Actually there is: it is called psychotherapy.

Everything you do which changes the way you think also changes your brain. Recent neuroimaging studies of people who have undergone Cognitive Behavioral Therapy (CBT) by Porto et al. and by Quide et al. show different patterns of brain function than those who have not had such therapy. There is another type of psychotherapy known as Dialectical Behavioral Therapy (DBT) which incorporates mindfulness and meditation practices into CBT. A large body of neuroimaging studies by Newberg demonstrate that mindfulness and meditation practices also permanently change the functioning of the brain.

But what about schizophrenia? Isn’t the only hope for schizophrenics to keep them doped up in a zombified stupor until the day they day? A recent New York Times article titled “New Approach Advised to Treat Schizophrenia” says no; the best treatment for schizophrenics is minimal use of antipsychotic drugs and lots of psychosocial therapy. The article then goes on to tell us that there is actually nothing “new” in this treatment approach, as it has been used in Scandinavia and Australia with great success for decades. It is only new to American psychiatrists who are too ignorant and arrogant to learn anything from the rest of the world and will only accept a study that has been carried out in America. But the reality is that it is not new – even in America. It is the model pioneered by Loren Mosher back in the 1970’s before Big Pharma got him fired from his post as chief of NIMH’s Center for the Study of Schizophrenia…because he was interfering with the profits from their latest huge money maker: antipsychotic drugs.

The reality is that drugging patients into a stupor with huge doses of antipsychotics prevents recovery from schizophrenia. This is why third world countries like India and Nigeria have much higher recovery rates for schizophrenia than the US; they cannot afford antipsychotic drugs which have good short term effects and very bad long term effects. Harding’s Vermont study found that half to two thirds of unmedicated schizophrenics recovered and Harrow found similar results. This is in stark contrast to medicated schizophrenics whose recovery rate is around 10 to 20%.

When prescribed appropriately, psychiatric medications are lifesaving, life changing wonder drugs. However, when over-prescribed or inappropriately prescribed they can lead to great harm and even death. What is needed is a major curtailment of polypharmacy, off-label prescribing, and non-specialist prescribing. The use of psychiatric drugs needs to be reduced to a mere fraction of current use rates and needs to be replaced or supplemented with appropriate psychosocial interventions which include not only therapy but such basics as housing, food security, and education. Money needs to be invested in social change rather than pill popping if we wish to create a healthy nation.

Would we say that just because insulin is good for diabetics that everyone should take it? No, that is nonsense because it would totally destroy a normal metabolism. Yet this is exactly the approach we are taking with psychiatric medications thanks to the misinformation that Big Pharma feeds to doctors and the general public in order to increase their sales and line their pockets.

Definitions Used in this Article

Sedatives: MCD codes T42.3 Barbiturates, T42.4 Benzodiazepines, and T42.6 Other antiepileptic and sedative-hypnotic drugs (Z-drugs such as Ambien and Lunesta)