Drugs are a popular topic in today’s media. From the war on drugs, the widespread legalization of marijuana, or the opioid crisis, it’s hard to miss a conversation that revolves around drugs.  This isn’t news, though. Drugs have been around for a long time. In fact, drug use has been ingrained in societies for thousands of years.

Here at Rehabs.com, it’s important for us to look at historic trends to see how drug use has affected people since drug use began. But, since that kind of historical data doesn’t exist, we decided to scale down our research and look at a smaller timeline – the past few decades. We went through the National Survey on Drug Use and Health from 1979 through 2017* from SAMHSA and compiled the data to figure out what the most popular drug is by decade. Take a look at what we found below: 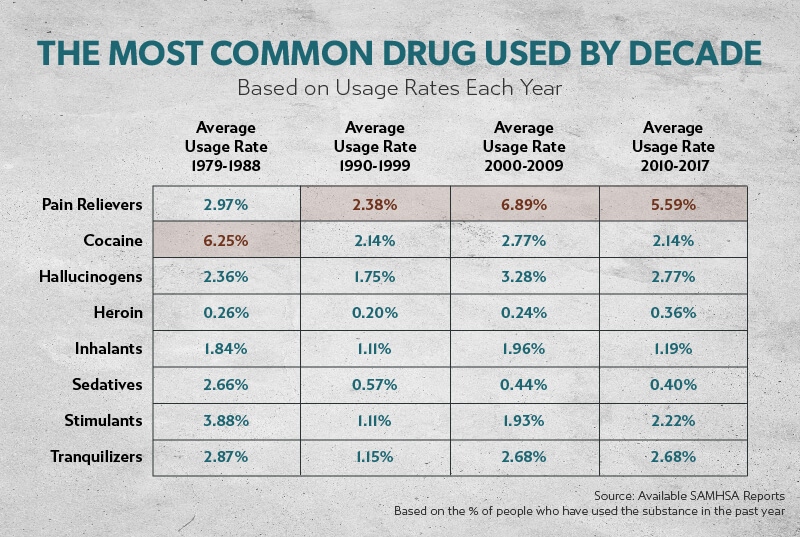 According to SAMHSA reports, the most popular drug by decade (excluding alcohol and marijuana) changed over time. The percentages refer to the number of people who have reportedly used the drug within the last 12 months at the time of the survey response. Cocaine had the highest usage rate by a fair margin in the ’80s. Drug use rates dropped overall in the ’90s, but analgesics/pain relievers were the most commonly used substance for that decade. Pain relievers remained the most popular drug for the next 2 decades, with usage rates rising substantially over the next 20 years. 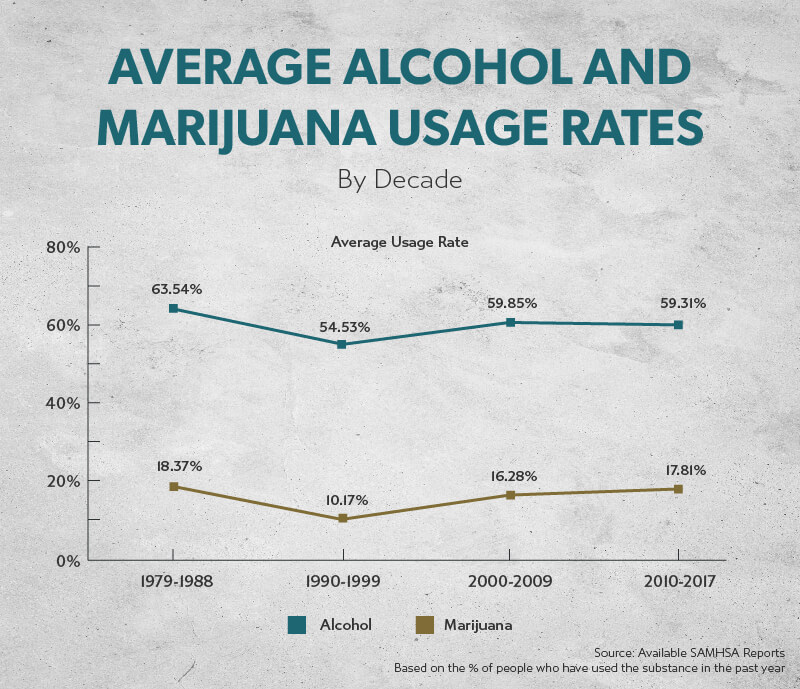 Change in Average Drug and Alcohol Usage By Decade 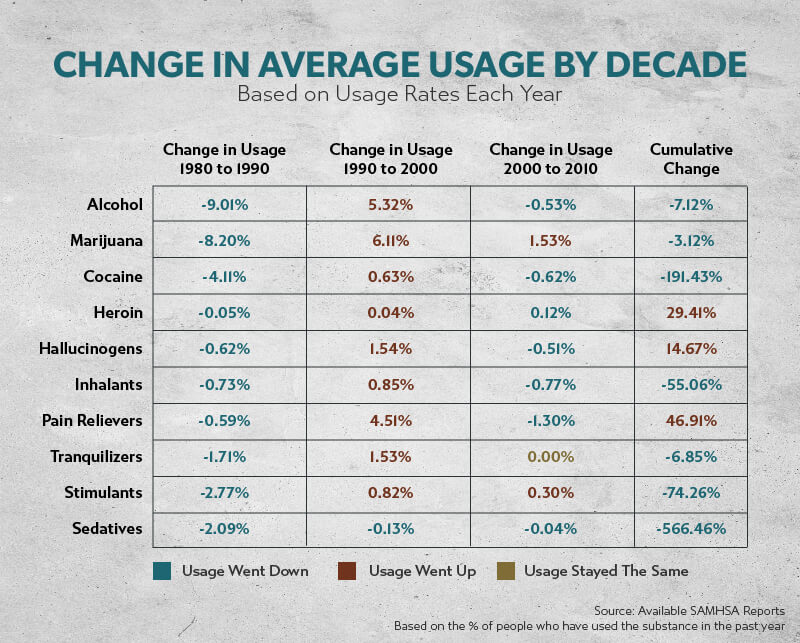 The final piece of information we wanted to highlight is the change in usage over each decade. From the 1980s to the 1990s, every drug showed a decrease in usage, with some having a decline of almost 10%. By the 2000s, usage of most drugs (excluding sedatives) increased. From 2000 to 2010, there were increases and decreases, with the majority of drugs showing decreased usage. Tranquilizers were the only drug where usage did not increase or decrease.

Some drugs showed a substantial decrease in cumulative change. Average usage rates for sedatives dropped by over 500% and cocaine usage rates dropped by almost 200%, meaning people were over five times less likely to have used sedatives over the past year, and almost two times less likely to use cocaine. Heroin, hallucinogens, and analgesics/pain relievers are the only drugs that have had a cumulative increase in use.

We can see that analgesics/pain relievers have been the most used drug over the past three decades. This can be closely linked to the opioid crisis, which has become extremely prevalent since the increase in opioid prescriptions in the 1990s. Most drugs have had a decrease in usage cumulatively, while heroin, hallucinogens, and analgesics/pain relievers have increased. Alcohol and marijuana use has been decreasing, however, the change has not been substantial. If you or someone you love is struggling with substance use disorder, our team has the resources to help.

The information and graphics in this blog post can be used and displayed by all commercial and non-commercial websites without charge. However, use is only permitted with proper attribution to rehabs.com. When using this information or any of these graphics, please include a backlink to this page.

Getting Help for Drug Addiction

If you are looking for additional information and resources on drug addiction, let us help. Our admissions navigators are available by phone or text to help you find the right treatment program for you or your loved one.

Blog TeamAUTHOR
Take the next step