In the summer of 2012 when a recent high school graduate identified as Jessica took ecstasy for the first time at a concert, she told CNN that it made her feel “loose and comfortable.” She went on to say, “(After it was over), it wasn’t like a depression, but it was like, ‘Aw man, I wish I felt that way again.’”

I’m sorry Jessica, but if your experience with MDMA involved a safe, mellow high with no hangover, you were sold some bunk stuff. The ignorance of the unexperienced drug user seems to be part of what propagates the myth that pure MDMA is a harmless substance.

When you roll for the first time you definitely notice that you are incredibly inebriated. The effects of molly include an uncontrollable grinding of the teeth and jaw, intensely heightened physical sensations, and seeing light trails. If this stuff doesn’t happen to you after about forty minutes then you just ate a vitamin, or worse. If you take a large enough dose of MDMA you may start to hallucinate, including seeing or hearing things, panic attacks and blackouts.

After the come down, your brain should be temporarily depleted of serotonin, making you feel depressed or down for the next day or so. Think of it as a molly hangover.

DanceSafe, a nonprofit organization dedicated to promoting safety at raves, music festivals and nightclubs, classifies MDMA as a stimulant, like cocaine or speed. Here’s how it works.

Serotonin is a neurotransmitter that the brain releases to make feelings of happiness. Normally the serotonin is collected by special transporters after being released. The chemical MDMA mimics serotonin, so when you eat or snort it, your brain absorbs the chemical using the same transporters.

When all of those MDMA molecules get sucked up, the transporters get overloaded with too many chemicals, and they start to release serotonin back into your brain. This results in a sudden flood of serotonin that creates intense but temporary feelings of well-being and love.

People realized that MDMA was perfect for dancing around the time it came to prominence in the 1970s. The heightened feeling of energy and euphoria was ideal for dancing at the disco because it made you feel extremely sociable and friendly, but without the dangerous side effects of cocaine.

Unfortunately it’s not all peace, love, unity and respect. The DEA reports that between 2009 and 2012 the number of ecstasy related arrests, emergency room visits and deaths increased over 100%, which happens to coincide with the rise of the electronic dance music (EDM) festival.

In November 2013, Massive Advisors LLC estimated that the EDM business was worth a combined $20 billion, in a whitepaper released at the Amsterdam Dance Event music conference. 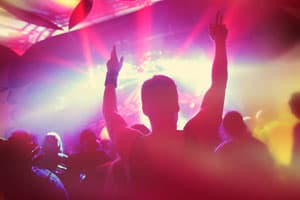 To put it into perspective, a ticket to EDC Las Vegas 2014 will set you back $385.23 for general admission, and $653.20 for VIP admission. It is a three-day event, so you also have to book a hotel in the Vegas area, plus a shuttle pass, locker fees, food and refreshments. There is an option to attend the concurrent EDMBiz conference for an additional $372.70.

This is the standard price range for music festivals like Coachella, Bonnaroo, Lollapalooza, Ultra Music Festival and HARD Summer. It is common for one fan to spend thousands of dollars to travel across the country, or the world, for a destination EDM festival. Now multiply that number by the 345,000 attendees at EDC Las Vegas 2013.

Meanwhile the world’s highest paid DJ’s like Calvin Harris, Ti?sto and David Guetta are making six figures per appearance. The Nightclub & Bar Top 100 Club list shows that the most profitable nightclubs in the world by far are the EDM nightspots of Las Vegas. XS Nightclub and Marquee Las Vegas both pulled in $80-90 million in 2013.

No wonder Robert FX Sillerman dropped $1 billion in 2012 to acquire almost every festival production company in the US, officially transforming EDM festivals into a big, publicly traded business.

“Since it’s impossible to tell what’s in a pill or powder without either taking it, or analyzing it with a chemistry kit, it is easy for drug dealers to sell fake stuff even to experienced users.”
According to the DEA National Drug Assessment Summary of 2013, the amount of MDMA seized by law enforcement has dropped from, “1,118,000 in 2009 to 949,000 in 2010 and again to 922,000 in 2011.” About 10% of law enforcement officers surveyed reported high levels of availability in their area. The DEA seems much more concerned with the rise in heroin and methamphetamines.

DEA Spokesman Rusty Payne told USA Today that when law enforcement tests seized drugs that are marked as molly, they often turn out to be another substance. They often find a designer drug called methylone or bath salts, which is marketed as a legal alternative to ecstasy.

Since it’s impossible to tell what’s in a pill or powder without either taking it, or analyzing it with a chemistry kit, it is easy for drug dealers to sell fake stuff even to experienced users.

According to Payne, “Just because it says molly on the label, means nothing. Molly can be whatever the drug dealer wants it to be. There are hundreds of different synthetic drugs out there. They look a lot alike and they are marketed alike.”

Molly is most popular with the age group 16-24 years. In the US, the substance has been related to over 100 hundred deaths each year between 2009 and 2012. In contrast, the Center for Disease Control (CDC) estimates there are 100,000 alcohol related deaths each year, and another 100,000 annual tobacco related deaths. Ninety percent of the people who do overdose on ecstasy have taken it in combination with other drugs, such as opiates or alcohol.

In 2012 two people died MDMA related deaths at EDC Las Vegas 2013. A 31-year-old man was run over by a truck in the parking lot. And a 22-year-old woman jumped off the balcony of her 27th floor hotel after taking ecstasy. Authorities mentioned she had a history of paranoid delusions.

Insomniac Events emphasized health and wellness for EDC 2013, including a zero-tolerance drug policy.

At the same time, the website recommended that ravers dress for the Las Vegas heat, and stay hydrated at one of many water stations placed throughout the event. There were four air conditioned cooling down lounges, as well as medical stations staffed with professionals. A team of volunteers dubbed ‘Ground Control’ were trained to recognize the signs of MDMA overdose and alcohol poisoning.

Did it work? There were no deaths at EDC Las Vegas 2013, and only 49 felony arrests. About 600 attendees called for medical help, but only a handful were actually hospitalized.

Promoters seem to have made their peace with the kids who sneak drugs into EDM festivals. They have opted instead for a policy of education, and better equipped facilities.

All photos courtesy of Insomniac Events