The Opioid Crackdown (Part IV): What Can and Should be Done About the Opioid Crisis?

On October 26, President Trump addressed the nation about the opioid crisis, officially declaring the so-called epidemic “a national public health emergency under federal law.” Showing how little he understands about addiction, Trump asserted that, based on his own experience of never having had a drink, “If we can teach young people – and people, generally – not to start, it’s really, really easy not to take [drugs.]”

Although in Part 1 and Part 2 of this series, I shared evidence that just a small percentage of people prescribed opioid painkillers become addicted to them and that they are not the main driver of the current crisis, the truth is that it’s relatively easy to start using drugs (alcohol included) and, more often than we’d like, to become addicted to them. In the case of opioid medications, they ease physical pain and can make you feel relaxed and euphoric. According to the National Institute on Drug Abuse, opioid medications can produce a sense of well-being and pleasure because they affect brain regions involved in reward. They act by attaching to specific proteins called opioid receptors found on nerve cells in the brain, spinal cord, gastrointestinal tract, and other body organs. Over time (with opioids, it doesn’t take very long), when used repeatedly, tolerance can develop resulting in the need for a higher dose to get the same effect. When used for pain management, physiological dependence on such drugs is not the same as “addiction” or an opioid use disorder (OUD), the latter caused by intentional misuse of the drugs.

The same phenomenon can take place with illicit opioids such as heroin, which as noted in earlier articles in this series and in a VICE article by Maia Szalavitz, is not usually started by individuals “innocently” using opioids prescribed to them. Her article opens with, “Just like they did in the 80s, Americans are increasingly going straight to heroin, skipping prescription opioids. Too bad US policy doesn’t reflect that.” She notes that the government’s focus on prescription drugs is off the mark because they are not currently driving the opioid crisis.

What Can Be Done? 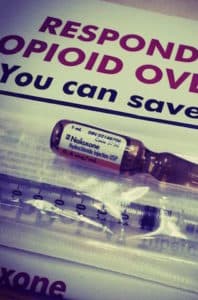 An entire book could be written about what can and should be done about the opioid problem. In addition to the recommendations of the recently released President’s Commission on Combating Drug Addiction and the Opioid Crisis, we now have numerous U.S. government agencies (most housed within the Department of Health and Human Services or HHS), including the Centers for Disease Control and Prevention, Food and Drug Administration (FDA), Substance Abuse and Mental Health Services Administration (SAMHSA), National Institute on Drug Abuse, as well as the National Academy of Sciences that have set forth recommendations and goals for countering the opioid crisis.

I was told by a spokesperson that all the agencies have the same endgame, but different ways of going about it and collaborating with each other. A number set forth their efforts in testimony to HHS this past October.

Following Are Just Some Considerations:

The Cost of Fighting the Opioid Crisis

I could go on and on with a much longer list including the need for better distribution of naloxone (a life-saving medication to reverse opioid overdose) and the importance of educating people not to mix drugs that increase the risk of overdose. But all of the things necessary to reverse the opioid problem cost a lot of money.

We’ve been here before. The powers-that-be should take a look at the evidence that anti-drug ads don’t work and may even have the opposite of their intended effect.-Anne Fletcher

In a recent NPR interview with US Surgeon General Jerome Adams, the commentator stated that Patrick Kennedy, a former Congressman who served on the White House Opioid Commission, suggested that it would take at least $10 billion to fight the opioid crisis. She asked Dr. Adams if he expected the president to ask for that money from Congress.

His somewhat vague response was that the president has asked Congress for “a significant amount of money in his pleas to Congress” and that partnership with multiple parties, including business and law enforcement communities as well as state and local government are needed. The truth is that it’s unclear where the money would come from.

So far, I’ve heard lots of talk about advertising campaigns. As recently reported in The Hill, Trump said, “One of the things our administration will be doing is a massive advertising campaign to get people, especially children, not to want to take drugs in the first place because they will see the devastation and the ruination it causes to people and people’s lives.” We’ve been here before. The powers-that-be should take a look at the evidence that anti-drug ads don’t work and may even have the opposite of their intended effect. As noted in a Popular Science article on this topic, “When anti-drug ads say ‘don’t do drugs,’ they inherently bring up the implicit question ‘should I do drugs?’” I guess we’ll have to wait and see how big a dent Trump’s ad campaign, which certainly won’t be cheap, makes in the opioid crisis and hope that other sources of funding are found to help the people who are in dire need of help.

Additional Reading: The Opioid Crackdown: Have We Gone Too Far? (Part III)