There’s a saying in many recovery circles: “Once an addict, always an addict.” The phrase is intended to remind people in recovery that sobriety is a constant work in progress and that if they cease to commit themselves to the task, it may slide them back into old habits that once again hook them on their drug (or behavior) of choice.

The phrase has received criticism from individuals who have overcome addiction, as well as mental health professionals for its reinforcement of the belief that someone who has grappled with addiction is never better, never in the clear, and is always, in some way, damaged.

As someone who has struggled with an addiction to exercise, I see both sides of the argument (for and against the notion that one is always an addict). On the one hand, it can be helpful to maintain an awareness of problem behaviors or signs that you are slipping back into old habits which previously led to self-destruction or introduced a troubling level of damage into your interpersonal or professional life. On the other hand, to label yourself with a word that connotes a loss of self-control and helplessness may prevent you from embracing your ability to change, grow, and become someone who is not dependent upon a substance or excessive behavior.

How We See Ourselves

How we see ourselves has an enormous impact on the decisions we make, the effort we put forth, and the success with which we achieve our goals. Research has shown believing that self-control is a limited resource makes people more likely to feel that their willpower is depleted following a demanding task. (Those who believe self-control is unlimited display fewer, if any, deficits in their willpower following the same task.) Women who are told they are bad at math perform worse on math tests than women who are told there are no gender differences in math ability.

How, then, does believing oneself to be an addict impact one’s sobriety when compared to believing oneself to be capable of growth, change, and sobriety (or, in some cases, moderation)? A 2011 review published in the journal Addictive Behavior found that individuals seeking to overcome an addiction are more likely to succeed if they have high levels of self-efficacy – a term denoting a belief in one’s own ability to achieve goals and recover from setbacks. The study does not equate labeling oneself an addict – or endorsing the statement “once an addict, always an addict” – with having low self-efficacy. So it may still be possible to label oneself an addict, believe that this identity always holds, and still persevere in sobriety.

Looking for Clues Within the Brain 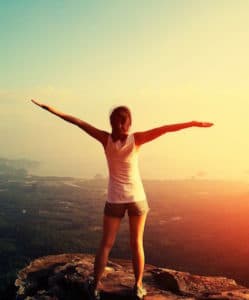 The researchers took the brain activation patterns (and subsequent self-reports) from the recovered women as signs that they still engaged in a level of asceticism characteristic of eating disordered individuals – an observation that other research has validated. However, the recovered women had maintained normal menstrual cycles, refrained from binging and purging, and hadn’t significantly restricted their caloric intake in the year prior to the study. Sure, their brains differed from women who had never had an eating disorder. But so would the brain of, say, someone who had grown up speaking two languages compared to someone who had only spoken one (even if the former example ceased speaking his or her native tongue later in life).

I raise this example to illustrate a point: Sure, the brains of prior addicts and previously eating disordered individuals are wired in a different manner than the brains of individuals who have never struggled with these issues. So, yes, there is some truth to the statement “once and addict, always an addict.” But so long as someone is not engaging in a self- (or other-) destructive patterns of behavior that they feel they cannot cease, is it not more growth-promoting and encouraging to remove the label of “disordered” or “addicted” than to keep those labels slapped on?

The Negative Power of Labels

I know that, for myself, identifying as “an exercise addict” limited my self-image as well as my self-efficacy. It wasn’t until I removed that label that I learned to develop a healthier relationship with exercise (and with my body). I don’t see how I would have gotten better if I had kept promoting the narrative that I was trapped and helpless inside an excessive pattern of behavior that I had no control over. What “cured” me, if you will, was believing that I didn’t have to be addicted – until I was no longer addicted.

This doesn’t mean that I am not aware of my own personal red flags (such as tendencies towards excess, focusing too much on numbers, cancelling social plans or getting unnecessarily anxious about modifying my routine or missing a gym session). But I don’t need to self-identify as an addict in order to maintain that awareness. Moreover, I feel that if I did, I would continually convince myself that I wasn’t capable of living a “normal,” functional existence without being constantly at risk of falling back into old patterns – and, as a consequence, risk courting those out of control behaviors and reinforcing a false belief in my own helplessness.