Is Addiction Nature or Nurture, Chicken or Egg? It’s More of a Scramble

In a recent article titled, “The Myth of the Demon Drug” at TheFix.com, Dr. Bruce Alexander reviewed the history of experiments examining the effect of social and physical environments on how likely a rodent is to become addicted to a drug such as cocaine. He was a pioneer in this field, and his work has been replicated and extended by others. The gist of the research is that when rodents are in deprived environments (in small spaces, offered unappetizing or inadequate food, socially isolated) they are more likely to become addicted to a drug like cocaine. When placed in an enriched environment with plenty of space, good food, other rodents, and so forth, they are much less likely to become addicted, although a significant proportion still do.

This research is sometimes used to suggest that the drug characteristics may not be important, and that substance use disorders (SUDs) do not result from drug exposure.-Dr. Mark Willenbring

This research is sometimes used to suggest that the drug characteristics may not be important, and that substance use disorders (SUDs) do not result from drug exposure. Some may even argue that this research proves that SUDs are “learned behaviors” that are almost always reversible and that SUDs are not “chronic and progressive” in nature.

The etiology and development of substance use disorders, however, are more complex and nuanced than that.

First, SUDs, like most psychiatric and common chronic medical disorders, involve an interaction between genetic vulnerabilities and environmental factors. Genetics contribute roughly 50 percent of the risk for developing SUDs. Most of that genetic vulnerability is shared among several classes of psychiatric illnesses, including mood, anxiety and personality disorders, ADHD, and a broader tendency to have difficulty inhibiting behaviors, especially impulsive or rewarding ones.

Rather than a gene or two, hundreds – if not thousands – of genes each contribute a tiny amount to the vulnerability to these disorders, which is why it’s turned out to be so much more complicated than initially thought to use genetic sequencing to quantify risk or develop new therapies. There are also drug-specific genetically determined traits that help determine which drug someone might become addicted to. For this reason some people become addicted to opioids but not alcohol.

Having a stimulatory response to either alcohol or opioids increases the risk for developing addiction to that specific drug.-Dr. Mark Willenbring

Having a stimulatory response to either alcohol or opioids increases the risk for developing addiction to that specific drug. Risk is also increased by a lack of adverse responses to a particular drug, as well as how much one likes the drug to begin with. For example, almost every opioid addict I have treated had a stimulating, euphoric, pleasant feeling the first time they took the drug, whereas most people feel sedated, nauseous, itchy and can’t wait to get off of them. The future alcohol-dependent person is the one who in high school was still standing, saying, “Where’s the party?” when everyone else is passed out or vomiting. Someone who experiences sedation, fuzzy thinking and nausea every time he or she drinks is not going to develop an alcohol use disorder.

Many environmental variables have important influences on whether addiction develops as well. Putting wine or spirits into grocery stores, for example, increases consumption in the population. If cannabis or heroin is cheap, high quality, and readily available, use and addiction will increase. Raising taxes on alcohol and cigarettes decreases consumption. How our immediate social group views drug use is important. But it’s not just these social influences that matter.

That means that early childhood neglect or abuse, including poverty and hunger, may result in increased addiction, crime, suicides, homicides, and severe psychiatric illnesses over the long term.-Dr. Mark Willenbring

In order for many chronic complex psychiatric and “below-the-neck” disorders such as diabetes to develop, the genes involved may have to be “turned on” – that is, expressed. Genes are turned on or off in a highly dynamic process called epigenetics. DNA in genes may or may not be expressed or “available” until triggered by an environmental event. The most common and one of the most powerful triggers is early childhood neglect. Importantly, epigenetic changes in gene expression may not only be permanent for that person, but may be passed on to offspring. That means that early childhood neglect or abuse, including poverty and hunger, may result in increased addiction, crime, suicides, homicides, and severe psychiatric illnesses over the long term. 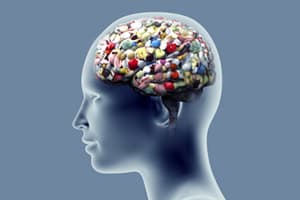 Finally, addiction develops only through lengthy exposure of the brain to high levels of a drug. Neuroadaptation refers to such changes in the brain’s mechanisms that regulate intake of that specific drug, leading to impaired control over use once it starts, preoccupation and craving, and a reduced ability to inhibit drug use. However, the degree and completeness of brain dysregulation of intake varies from very mild and reversible to very severe and irreversible. The more severe the SUD, the less likely this neurobiological dysregulation can be reversed. Thus, for people with severe addiction, it is very unlikely they will ever be able to control use in a reliable way. For that group, the condition is recurrent or chronic. People with SUDs in rehab, AA groups, hospitals, and who are incarcerated typically represent the most severely affected 10 to 15 percent of all those in the community with a specific SUD. Thus, for people like this, the SUD is permanent and abstinence is likely to be the only way to achieve stability. Even after extended abstinence, they will almost certainly lose control over their use sooner or later. People with mild SUDs are much more likely to be able to reduce use to low-risk levels, often after a period of abstinence.

SUDs develop out of this extraordinarily complex interactive process … Thus, addiction is nature and nurture, chicken and egg.-Dr. Mark Willenbring

SUDs develop out of this extraordinarily complex interactive process among environmental, immediate social (20 to 30 people closest to you), psychological / experiential, and genetic and epigenetic processes. Thus, addiction is nature and nurture, chicken and egg. Developing new prevention and treatment methods will require understanding the dynamics of this complex, omelette-like system. Our current inability to model a system like this has led to a lull in developing new approaches. We’ll have to wait until our mathematicians and other scientists develop improved ways to model complex dynamical systems.

In the meantime, let’s avoid sterile debates based on simplistic ideas of how we work. Don’t take too literally all those seductive diagrams of brain mechanisms shown in classes and rehabs, or the sexy but deceptive brain imaging pictures. We’re way more complex than that.

*This article was edited with support from Anne Fletcher.

Mark WillenbringAUTHORMark Willenbring, M.D., the founder and CEO of Alltyr is the former Director of the Division of Treatment and Recovery Research of the National Institute on Alcohol Abuse and Alcoholism at the National Institutes of Health (NIH) in Bethesda, MD. He has spent over 30 years as a clinician, scientist, teacher and leader. Prior to NIH he was Director of the Addictive Disorders Section at the VA Medical Center in Minneapolis and professor of psychiatry at the University of Minnesota. His research and leadership focused on new treatments for patients with chronic complex problems and implementing evidence based practices in clinical settings. While at NIAAA, Dr. Willenbring was featured in the HBO Addiction Special and developed the popular NIAAA Clinician's Guide: Helping Patients Who Drink Too Much and ReThinking Drinking, a guide for people who choose to drink alcoholic beverages. In 2009, Dr. Willenbring left academia and government, determined to transform the addiction treatment system to one that is scientifically based, accessible, affordable and attractive. Alltyr was incorporated in 2012 with the goal of creating and spreading a new model: Addiction Treatment for the 21st Century.
Take the next step