Many people describe the results of Project MATCH were that Cognitive-Behavior Therapy, Motivational Enhancement Therapy and Twelve-Step Facilitation had about the same outcomes. In this view, MATCH was a horserace, a competition to see who did best. Advocates of each model find nuances in these data to claim bragging rights. Actually, MATCH was not set up for such a simplistic comparison, but was designed to see if it was possible to “match” the person with the form of treatment which might best serve his/her needs (and unfortunately did not find many significant matches).

Unfortunately, in the current zeitgeist these various approaches (particularly CBT, MI and TSF) are often seen as mutually exclusive, or, worse, in competition with each other.-Mark D. Schenker

Unfortunately, in the current zeitgeist these various approaches (particularly CBT, MI and TSF) are often seen as mutually exclusive, or, worse, in competition with each other. Proponents of each method often feel that it is not sufficient to demonstrate the efficacy of their model, but prove the flaws of the others. (As I described in a previous Pro Talk article, this was once described as similar to “ethnic warfare.”)

In the area of psychotherapy, there have been significant efforts to find integration of approaches, whether through theoretical or technical paths. Dollard and Miller’s classic “Personality and Psychotherapy” in 1950 formulated an integration of the two competitive theories of that era: psychoanalysis and behavior therapy. This effort has been furthered more recently by Wachtel, Miller, Duncan and Hubble, pointing to important clinical interventions and higher-level understanding of the therapeutic process.

However, such an attempt to integrate approaches has been sorely lacking in the addiction treatment field. The treatment a patient will receive is more often dependent on the bias of the clinician or the program, and not on a thorough assessment of his/her needs. Proponents of each model are fiercely partisan, to the detriment of the field as a whole.

I do believe that an integration of these approaches is possible and is necessary for effective treatment to be provided. The integration I propose is a technical and theoretical one, rooted in a specific understanding of the addictive process.

Figure 1 presents a generic model which seems to fit one commonly-held view of substance use disorders.

In this model, substance use disorders are a result of some form of stressor, the nature of which may vary depending on the model used. The stressor may be a negative emotional state, an intrapsychic conflict, or an interpersonal problem. For example, patients and clinicians often describe their substance use as “self-medicating” an underlying emotional problem. Resolve the stressor (according to this theory) and the problem will go away.

…patients and clinicians often describe their substance use as ‘self-medicating’ an underlying emotional problem. Resolve the stressor (according to this theory) and the problem will go away.-Mark D. Schenker

The Disease Concept and Loss of Control 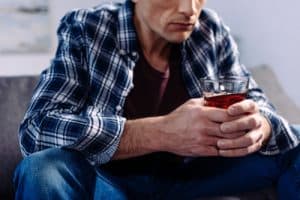 What this model misses is the autonomy of the addiction, the way the substance use has developed a life of its own. I believe that addiction is primarily defined (along with dependence and tolerance) by the presence of a “loss of control.” The central issue for me is not what initiates the substance use, but the loss of control that ensues when a person uses. (Father Martin had a story about a friend who got drunk one week because he was upset that the Colts lost, and drunk the next week celebrating that the Colts won.)

Once substance use is initiated, for some people a self-perpetuating cycle begins, based on a loss of control over that use. In this view, addiction (the inability to control one’s use) is a “primary disorder,” a problem in its own right, independent of the immediate trigger. (I will leave aside, for now, the controversial topic of the cause of this loss of control; it suffices to recognize that the use of substances has now developed, in the words of psychologist Gordon Allport, a “functional autonomy.”) The stressor itself is secondary to the fact of the addiction; it is a trigger, not a cause. Remove the trigger (in this theory) and the loss of control will still be there to be reckoned with.

The stressor itself is secondary to the fact of the addiction; it is a trigger, not a cause. Remove the trigger (in this theory) and the loss of control will still be there to be reckoned with.-Mark D. Schenker

Within this model, the first significant clinical issue to be addressed is coming to terms with one’s inability to control the use of substances (for some it is a specific substance, for others it is all substances). Without this understanding it is difficult to engage the person into a process of self-examination which will lead to change.

Twelve-Step approaches are directly pertinent to this issue. Recognition and acknowledgement of one’s inability to control substance use is the distinct meaning of the First Step of AA. For many of those we encounter in our clinical practices, this awareness is often supremely difficult to accept. It goes against our hard-won sense of autonomy, our identity as adults, and implies an existential recognition of our limits and finite nature.

Not every reader will accept the role of Twelve-Step work in arresting the progression of this problem. However, in this context, the task is not selling AA or NA, but in helping the patient recognize the loss of control he or she is experiencing.

The Role of Cognitive-Behavioral Therapy

In contrast, Cognitive-Behavioral Therapy does not primarily concern itself with the nature of the addiction, but rather with identifying antecedents of the addictive behaviors and developing alternative coping skills.

A schematic of the basic principles of CBT is depicted in Figure 3:

Within this system, the identification of antecedent cues for both stress and for substance use itself is an essential tool. (In the old days, we called this “insight,” but I won’t belabor this point either.) While CBT is most often associated with the role of cognition in development of negative emotional states, other stressors may also be included in this rubric. I often encourage patients to break these down into internal triggers (“HALT”: Hungry, Angry, Lonely, Tired) and external triggers (“PPT”: People, Places, Things).

While Twelve-Step advocates often stress the importance of avoidance of high-risk situations, learning to deal with the inevitable risky situation is critical.-Mark D. Schenker

I do not think that this is mutually exclusive with a disease approach. It is imperative for those with substance use disorders to be able to learn to deal with the normal stressors of everyday life and the specific stressors which trigger substance use directly. This is a skill which typically deteriorates over the course of an addictive process.

While Twelve-Step advocates often stress the importance of avoidance of high-risk situations, learning to deal with the inevitable risky situation is critical. If avoidance is possible, especially in the early stages of recovery, this is a good primary strategy. If it is truly unavoidable (and the Serenity Prayer’s “wisdom to know the difference” can be crucial), developing a coping plan is a judicious approach. There are many valuable coping strategies suggested in the AA fellowship (call a fellow AA or your sponsor, go to a meeting, meditate on your higher power) but there is no shortage of other creative coping skills.

The Role of Motivation

I am often struck at how often those in treatment already know most of the coping skills we have to present to them, yet fail to use them. We spend too much time in rehabs teaching the same old skills to those who know them already or could figure them out pretty quickly. We often miss the motivational aspect of their situation – coping skills are of no use if the patient does not even see the need to use them.

Motivational Interviewing and the Transtheoretical perspective offer crucial insights at this point. It is not enough to work with a patient to accept his disease, or to develop coping skills, especially when he is not fully ready to adopt such changes. A significant part of our job is to help the patient tap into his/her internal motivation and encourage them to take whatever steps they are willing to take. Again, paraphrasing Father Martin: “Maybe you can take a horse to water but can’t make him drink; but you can help him get thirsty.” This is where our scientific knowledge requires our clinical creativity to be useful.

An integration of treatment models is a more responsible and effective way of dealing with the power and subtlety of addictive disorders.-Mark D. Schenker

It is inevitable that each of us will be more comfortable in one school of action or another, our “home theory.” I am more worried about the attitude that one approach is “right,” that there is one size that will fit all customers. An integration of treatment models is a more responsible and effective way of dealing with the power and subtlety of addictive disorders. Clinicians are not doing justice to their clients if they limit their use of a range of modalities. This includes rejecting the use of addiction meds because they are not “real” recovery; focusing on developing coping skills without the context of motivation; conducting dynamic psychotherapy while rejecting the support of Twelve-Step fellowships. Such theoretical blinders limit our own understanding of the phenomenon we are addressing and do not provide effective care for our patients.

Mark D. SchenkerAUTHORMark Schenker, Ph.D. has been a licensed psychologist for over 30 years, and has spent the majority of his career in the addiction treatment field. He began in the mental health arena in 1972, as an aide at McLean Hospital in Belmont, MA. He became intrigued by the complexities of the patients he encountered, and ultimately pursued a Ph.D. in Clinical Psychology from Temple University in Philadelphia. Over the years he has provided direct clinical service, created and managed innovative programs, supervised psychologists and psychiatric residents, and trained mental health clinicians on a national level. In addition to his clinical and teaching positions, he has been a strong advocate for the inclusion of addiction treatment into the mainstream of mental health practice and training. He is passionate about enhancing the ability of psychologists and other mental health professionals to recognize, assess and treat the addictive disorders which are ubiquitous in our society. In this context, he has served as the Member-At-Large for Practice, on the Board of the Society of Addiction Psychology, working toward the integration of psychology and addiction treatment. Dr. Schenker is the author of A Clinician’s Guide To Twelve-Step Recovery(W.W. Norton, 2009) as well as various papers and chapters on related subjects. He currently oversees psychological services at Caron Treatment Centers, a noted addiction rehabilitation center, and maintains a private practice in psychology in Philadelphia, PA.
Take the next step