Fake Pot – A New Danger on The Streets

Marijuana has been the most demonized of drugs – a relatively safe sheep cloaked by legal authorities in dangerous wolf’s clothing. We have previously discussed the illogic of criminalizing the never lethal pot, while allowing the careless distribution of the often lethal prescription opioids.

But old fashioned, organic, natural pot now has hundreds of new laboratory-derived synthetic cousins (“K2”, “Spice”, “Bliss”, “Cowboy Kush” “Scooby Snax” and many more). These are a completely different story – ever so much more dangerous than the natural stuff that grows in the ground.

What is Synthetic Pot?

The term “synthetic pot” covers a heterogeneous and ever-growing array of compounds that have in common their impact on the same THC receptors activated by natural pot. Most commonly, the compounds are sprayed onto diced, dried plants and look like natural pot.

The first synthetic THC activators were developed twenty-five years ago in a university laboratory. Ten years ago, underground labs started sprouting up, producing street versions. Recently this has geared up to mass production. Synthetic pot is very cheap and very accessible.

Outbreaks of dangerous side effects from fake pot are on the rise – often affecting dozens or hundreds of people at a time using the same bad batch and sometimes resulting in death.

The emergence of the synthetic drug trade has made this the most dangerous time ever to use street drugs. Synthetic opioids (fentanyl and carfentanil) are now killing more people in overdoses than heroin. And synthetic marijuana makes it risky to smoke street weed – you never know what you are getting. 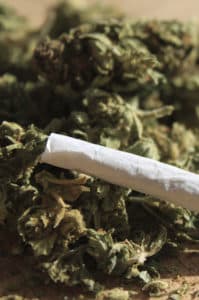 The serious side effects of synthetic marijuana can occur acutely or chronically. Part of the danger derives from the imprecision of the spraying process, creating hot spots of very high concentration that don’t exist in natural pot from plants.

Psychiatric side effects include severe anxiety, paranoia, bizarre behavior, confusion, delirium, aggression, catatonia, delusions, and hallucinations. Medical side effects include nausea, vomiting, elevated heartbeat and blood pressure, seizures, kidney failure, and even death. There is also a markedly increased risk of accidents and vulnerability to assault.

There are no recent data on the number of emergency room visits attributable to synthetic pot, but it is at least thirty thousand a year and increasing rapidly.

Part of the attraction of synthetic pot is that there are so many forms of it – making detection difficult and prosecution problematic. Synthetics are thus especially popular among professional athletes, parolees, and other people subjected to random drug screening.

The products are sometimes sold openly in stores, hiding behind deceptive labelling as “incense” or “potpourri.” The Federal Analogue Act makes illegal the minor tweaking of existing controlled substances, but cops and prosecutors have a tough time catching up with all the new chemicals and ways of disguising them.

And control is even more difficult because China is a big player in the synthesis of the chemicals used to produce the synthetics.

The increasing street use of dangerous synthetic pot cuts both ways in the debate whether the much safer, organic stuff should be legalized for medical and/or recreational use.

Puritanical types, like Attorney General Jeff Sessions, use the dangers of synthetic pot as justification for their efforts to keep all cannabinoid drugs illegal. They worry, legitimately, that organic pot may be a gateway for some people – particularly teenagers – to the purposeful or accidental use of the synthetics.

Driving pot underground may precipitate more use of the dangerous synthetics, especially among those attracted by their ability to escape detection and cheap price. A regulated market of freely available organics may be much safer than an expanding market of illegal synthetics.-Allen Frances

But this argument can be turned on its head. Driving pot underground may precipitate more use of the dangerous synthetics, especially among those attracted by their ability to escape detection and cheap price. A regulated market of freely available organics may be much safer than an expanding market of illegal synthetics.

There are clear risks both ways. The relative lack of empirical data gives free rein to the opposing extreme prejudices of the austere authoritarians vs the anarchic libertarians.

For the present, there is no clear right answer. I am not sure what is best during this interim period that is handicapped by the unfortunate combination of increasing synthetic use and data paucity. But my intuition favors continuing the trend toward more and more states accepting legalization.

Pot prohibition has been as big a failure in the past fifty years, as the alcohol prohibition that failed one hundred years ago. One in seven adults in the U.S. currently uses pot and almost half have tried it.

Trying to criminalize pot has been a colossal failure in the past and is likely to stimulate, not contain, the increasing use of dangerous synthetics.