Alcohol Use Disorder: Inside the Body

It is estimated that up to 10% of Americans are alcoholics.

But what is happening inside the body, on a physiological level, after a person consumes alcohol? 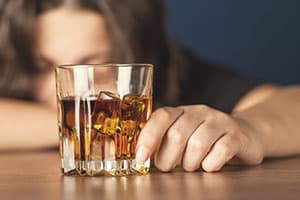 In the liver, alcohol is metabolized by a couple of important enzymes. It is first broken down by the enzyme alcohol dehydrogenase and turned into acetaldehyde.  This substance causes the intoxicated feeling following a few drinks and also leads to the less pleasant sensation of facial flushing, dizziness, and nausea.  Then another enzyme gets involved – Aldehyde dehydrogenase – and breaks down the acetaldehyde down into acetic acid.  Up-regulation of these enzymes occurs in heavy drinkers, causing some major CNS depression.

For long-term drinkers, there is risk to abruptly stopping alcohol consumption.  The body has become accustomed to the CNS depressant effect for these heavy drinkers, and so when consumption stops, there is excitation of the CNS, which can be quite dangerous and lead to worrisome withdrawal.

And that’s not all…

There are other serious complications of long-term alcohol use.  Because many alcoholics maintain a poor diet, there can also be a vitamin deficiency.  Vitamin B1 (thiamine) depletion can cause a triad of symptoms: ataxia, confusion and nystagmus.  Collectively, these are known as Wernicke’s encephalopathy – an acute medical state that requires repletion of thiamine for a chance at reversal. When left untreated, Wernicke’s encephalopathy can progress to Korsakoff’s syndrome – a condition that involves chronic and irreversible memory problems.

Several organs are deleteriously affected in the chronic alcohol consumer. Of course, the liver is at risk for a variety of ailments ranging from alcoholic hepatitis to cirrhosis. Alcoholism also can lead to anemia, cardiovascular disease, various cancers, depression, gout, infectious diseases, nerve problems and pancreatitis.

Before any of these physical consequences occur, alcohol will often first interfere with life functioning. All cultures are susceptible to such problems, making it extremely important to be mindful of our drinking patterns and behaviors.

If you’re wondering if you might be suffering from an alcohol use disorder consider these signs of dependency – the hallmarks of which include high tolerance and withdrawal symptoms:

If you think you might have a drinking problem – but you’re not quite sure – ask yourself the following questions:

If you said yes to any of those then you might have a problem. Receiving medical attention from a trusted provider can be life saving – not to mention the fact that treatment can save your relationships and career.