Alcohol and the Indian Culture: The History and Experiences of the Apache Indians

Common belief among white Americans is that alcohol was the great destroyer of American Indian culture. The story goes: the white man introduced alcohol to the Indians, the Indians drank to excess and were for genetic or moral reasons unable to control their alcohol consumption, and thus Indian culture declined and all but died out. But is it true?

The evidence says this is both overly simplistic and inaccurate. Indian culture is by no means monolithic, and different tribes had greatly different experiences with both alcohol and with white people. This article will focus on the history and experiences of the Apache Indians.

The History of Alcohol and Apache Culture

The Apaches consumed alcohol long before they ever came into contact with white colonizers (Haley, 1997, p. 98). In fact, the consumption of alcohol was deeply ingrained in Apache culture and was a part of social dances, healing ceremonies, war dances, and celebrations after a return from the hunt, war, or a raid. Traditional Apache brews – corn beer and maguey wine – did not keep well and had to be consumed soon after they were ready in order to avoid spoilage. Hence, drinking was a social activity and when the brew was ready it was enjoyed by all. Distilled alcohol was introduced shortly after first contact with the Spanish but it appears to have had little if any negative effect on Apache culture (Haley, 1997, pp. 39-40). 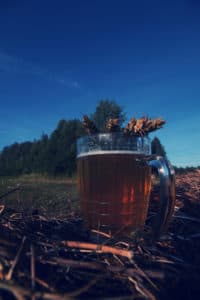 To understand the history of alcohol and Apache culture, and the real reasons for the destruction of their culture, it is essential to examine their economy prior to being forced onto reservations.  Apaches were a raiding culture. Although Apache women planted beans and corn, the bulk of the Apache economy was driven by raiding and hunting, not agriculture. Raiding played a huge role in defining Apache culture. A boy could only transition into manhood by having participated in four raids (Haley, 1997, p. 121). Before the first European contact it is reasonable to assume that Apache bands raided neighboring non-Apache tribes such as the Navajo or Pueblo Indians or other Apache bands, since a fully developed raiding culture existed at the time of first contact, and since the Apache continued to make raids upon their Indian as well as on their American and Spanish neighbors throughout the recorded period of pre-reservation history.

Trading and raiding were only allowed when dealing with enemies or outsiders. Within the band or when dealing with friends, gift giving was required. The more generosity a person showed, the greater his status. The one who gave away the most was the one who would rise to the status of headman of the extended family or chief of the local group or band. The cardinal Apache virtues were generosity and industry. Industry was gauged in terms of how much the man brought into the band by means of hunting or raiding. The cardinal vices for the Apache were stinginess and indolence. No one was kicked out of the tribe for laziness; however, a lazy man could be divorced by his wife and would suffer the scorn of the entire band. Lazy men were often referred to as “those whose shit is sticking out,” in other words, people who were too lazy to wipe their own behinds (Opler, 1941/1996, p. 465). Cowardice and laziness tended to be conflated; those who refused to go to war were considered too lazy to do so. When men returned from a hunt or raid and were giving away food and other goods as gifts, the lazy man would get the smallest share (Opler, 1941/1996, p. 333).

Apaches did not see excessive drinking as a disease or even as a problem in and of itself: it only became an issue when it led to laziness, the worst vice in Apache culture. Habitual drunkenness is classed as neither an illness nor a crime in traditional Apache thought. A man who was incapable of providing for his family because of habitual drunkenness would surely be classed as indolent, but it would be his laziness that was targeted rather than alcohol or some supposed disease of alcoholism. Many of the noted war chiefs, including Geronimo, were well known to be heavy drinkers. As long as a man could go on raids and successfully bring home the goods needed to supply his family and tribe, no one cared how much he drank.

An Attempt to End Raiding Culture

The Apache culture of raiding did not sit well with the Spanish when they began to colonize North America. Tired of their horses being stolen by Apache raiders, Bernardo de Galvez, viceroy of New Spain, instituted a new policy of pacification of the Apache in 1786 which remained in effect until 1821 when Mexico achieved independence from Spain. This policy consisted of supplying the Apache with food, tobacco, antiquated firearms, and an unlimited supply of free distilled alcohol with the intent of destroying the Apache culture by turning them into drunken sots (Haley, 1997, pp. 39-40).

The policy, however, was only a partial success. The Apache by and large ceased raiding Spaniard owned farms and ranches during this period; however, they failed to become drunken sots. In 1807, Zebulon Pike stated that the Apaches “appeared to be perfectly independent in their manners and were the only savages I saw in the Spanish dominions whose spirit was not humbled.”

It is likely that warfare with the Comanche and raiding their other Indian neighbors gave the Apache ample opportunity to continue their culture of raiding, warfare, and generosity, and that the boon of free Spanish alcohol, etc. was mere lagniappe. With the fall of New Spain and the independence of Mexico in 1821, the Apache lost their free alcohol supply and returned to raiding Mexico with as much gusto as ever.

The Results of Settling Indians Into Reservations

Indeed, it appears that what destroyed Apache culture was not distilled spirits, but rather, agriculture. In 1849, just one year after the treaty of Guadalupe Hidalgo put Apache territory under US control, the Bureau of Indian Affairs was moved from the Department of War to the newly formed Department of the Interior and a new Indian Policy was instituted which focused on settling Indians into reservations and turning them into farmers. However, such a policy could only have a devastating effect on a culture like the Apache since the essence of farming is stinginess; one must grow and accumulate crops then sell them at market.

Since participation in four raids was required for passage into manhood, it would no longer be possible for a boy to pass into manhood if he grew crops instead of raiding. Here is what Mescalero Apache Chief Cadette said to Captain John C. Cremony, circa 1863,

“You desire our children to learn from books, and say, that because you have done so, you are able to build all those big houses, and sail over the sea, and talk with each other at any distance, and do many wonderful things; now, let me tell you what we think. You begin when you are little to work hard, and work until you are men in order to begin fresh work. You say that you work hard in order to learn how to work well. After you get to be men, then you say, the labor of life commences; then too, you build big houses, big ships, big towns, and everything else in proportion. Then, after you have got them all, you die and leave them behind. Now, we call that slavery. You are slaves from the time you begin to talk until you die; but we are free as air. We never work, but the Mexicans and others work for us. Our wants are few and easily supplied. The river, the wood and plain yield all that we require, and we will not be slaves; nor will we send our children to your schools, where they only learn to become like yourselves.” (Cremony, 1868).

Although US Indian Alcohol Prohibition (Martin, 2003), which made it a crime to sell alcohol to Indians but not a crime for Indians to drink, was in effect from 1832 to 1953, this had no immediate effect on the Apache who could readily buy alcohol from Mexican traders or make their own corn beer or maguey wine. The first prohibition on the manufacture of corn beer and maguey wine by the Apache was instituted by John Clum on the San Carlos reservation (Haley, 1997, p. 305) where Clum served as Indian Agent from 1874 to 1877 (Dibbern, 1997). Before that, the Apache had been free to drink all they wanted whenever they wanted.

The Western Construct of Alcoholism

“Alcoholism” is a peculiarly Western, nay, peculiarly American philosophical construct which mixes medicine and morality together in a peculiar manner and which is found in no society in history except those which have imported it from the United States. As Fingarette (1988) and others have pointed out, belief in the disease concept of alcoholism requires blind faith in the dogmas of “loss of control” and “inevitable progression” etc. despite the fact that these are contradicted by all experimental evidence. It is no surprise that the concept of alcoholism was foreign to the Apache.

The Apache recognized that the consumption of alcohol could lead to “trouble” and the focus was on avoiding trouble.-Kenneth Anderson

The most recent anthropological research on the use of alcohol among contemporary Apache is Everett’s (1980) work from data which he collected in the 1970s. Everett found that many Apache who classed themselves as non-drinkers still drank corn beer.

Alcohol continues to carry out an important social function among the Apache. The Apache recognized the existence of frequent and heavy drinkers and referred to them as “camels.” The Apache recognized that the consumption of alcohol could lead to “trouble” and the focus was on avoiding trouble. It was recommended that when someone becomes drunk and belligerent and starts insulting a person, that person’s best response is to say nothing and walk away rather than engage someone whose mind is incapacitated by alcohol.