A Psychology Major’s Experience With Addiction and Ibogaine Treatment

Jason had been addicted to heroin from age 17 to  age 21. He was a psychology major at a prominent university and on the verge of losing everything due to his addiction. Then he discovered a radical treatment, illegal in the United States, that changed his life.

The treatment – a psychedelic that produces hallucinations and apparent expansion of consciousness – was a naturally occurring plant-derived substance known as ibogaine.

I was addicted to heroin for four years. I think it was largely due to childhood trauma. I  went to rehab and got clean, but I still wasn’t happy. I didn’t feel like I had much of a direction or purpose, and I felt really disenfranchised by the system.

I got kicked out of a sober house because I wouldn’t take antidepressants and Suboxone. I didn’t identify with Narcotics Anonymous at all, and I didn’t want to label myself as an addict. Then I discovered ibogaine.

My girlfriend, who had also been addicted to heroin, took it in Costa Rica. When she came back, she felt like a new person and was shining bright. I always had positive experiences with psychedelics – they were nothing like heroin or cocaine. Psilocybin (magic mushrooms) cleared up my suicidal thoughts as a teenager. I was a strict atheist at that time, but the first time I took mushrooms I had epiphany: I saw that there was something beyond this material world. 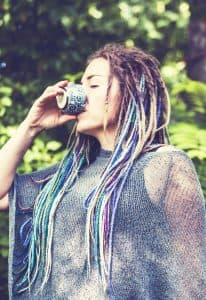 I raised money (with help from my parents) to go to Costa Rica, took ibogaine, and my life turned around. I completely lost the desire to use drugs. Suddenly, all these feelings I had – feelings that seemed automatic or robotic – became very malleable and changeable.

In my experience, ibogaine enabled me to go milestones from physical addiction in hours. I go back to Mexico now to a community where we treat people with ibogaine on my summer breaks. When I help treat people in Mexico for two or three days, they come in with serious addiction. In a normal rehab or program, they would suffer with withdrawal for a long time. With ibogaine, however, they take the treatment, then go to the beach where they can walk around for a while, then they sleep. No dope sickness. Not just the week when you’re kicking on the ground and your skin’s crawling, but the months when all your insecurities and emotions come up. The psychedelic aspects of ibogaine take care of that.

Visions help you contextualize the problems that people have, why they’re there, and what you can do to change. Even when people don’t have visions, the physical healing from the addiction is not the end of the recovery process. Ibogaine causes the brain to become neuroplastic, so it enables people to rapidly rebuild patterns in their life. Still, it’s so important to have aftercare. People shouldn’t go rapidly back to the same environment where they became addicted.

Where I work with ibogaine now, people generally stay in town for about three months after taking the treatment. It’s not just about the psychedelic; it’s about community. There’s this whole element of addicts treating other addicts. Being together with group of people with a common problem, or just being a part of a community, is what combats those insecurities and doubts. The spirit of this medicine is community. We get people into yoga or into sessions where they talk to a therapist, and we try to have patients come back to the center when someone else is being treated to support them. You’re initiated into a family. Community gives people a sense of meaning and purpose. Being in a place where you have community is so important.

There are ceremonies around the medicine that are about starting new life, letting go of things you don’t want to hold anymore and grabbing things you want. You see people become the people that they really are. A lot of times in life, people wear masks. When you watch people take ibogaine, you see them take off their masks. Someone who was anti-social is suddenly making friends. It’s amazing to watch.

A Brief History of Ibogaine

While ibogaine has been used by tribal communities in Africa for centuries – as a method for bonding with ancestors across the boundaries of time and space or treating conditions such as infertility – its first known use for addiction occurred in 1962 (Alper et. al, 2008.) A group of people who used hallucinogenic drugs wrote down their experiences. They were surprised to learn that, when heroin-addicted used ibogaine, they experienced no withdrawal symptoms (Lostof and Alexander, 2001).

The kind of rigorous clinical trials that have been conducted on legal drugs patented and marketed by pharmaceutical companies have not been conducted on ibogaine, leaving open questions as to its safety, efficacy, and the question of whether the chemical, placebo effect, or community connection with other ibogaine users are behind the effects reported anecdotally.-April Smith

However, more established researchers posited that the effects of ibogaine were not only due to a medicinal effect of the chemicals involved, but also the spiritual and ritual elements surrounding it. Jason’s experience seems to point to a blend of the two.

A 2014 study by Schenberg reviewed the experiences of 75 people who had been dependent on alcohol, cannabis, cocaine, crack – many of them on multiple drugs. A total of 61% became abstinent, and those who received more than one ibogaine treatment remained abstinent longer than those who did not. This study suggests promise for ibogaine. However, the kind of rigorous clinical trials that have been conducted on legal drugs patented and marketed by pharmaceutical companies have not been conducted on ibogaine, leaving open questions as to its safety, efficacy, and the question of whether the chemical, belief in the chemical (the placebo effect), or community connection with other ibogaine users – especially the kind Jason describes – are behind the effects reported anecdotally.

The Risks Involved With Ibogaine Use

Ibogaine, like any chemical, is not without risks. Ibogaine should not be taken by people with heart conditions, as it can cause irregular heartbeats. It can also be very dangerous when mixed with other drugs.

Unfortunately, because ibogaine is illegal in this country, it is often used by lay people with no medical supervision – people who may be hesitant to seek medical care because they used an illegal substance. They may also be unaware of the risks.  There have been several ibogaine fatalities, especially in people with pre-existing heart conditions or those who were using other drugs at the time of ingesting ibogaine.

As with any chemical – natural or synthetic – working with trained professionals is the best way to stay safe. Those fearing heroin withdrawal are often desperate for relief and vulnerable to claims of quick fixes. As Jason’s experience points out, taking the chemical is just part of the process. Therapy, community support, and creating new life patterns and skills are necessary for the success of any treatment.

Further research into radical treatments like this should be conducted so that those wishing to get off drugs safely, effectively and with a minimum amount of suffering have every possible option available to them and can make informed choices.

Jason is working on his PhD now and studying to become a clinical psychologist, specializing in addiction.