What You Need to Know About Ketamine

With an estimated 2.3 million people having used ketamine at least once in their life, the recreational drug has become one of the most popular and dangerous drugs found on the club circuit.

Although it is used as an anesthetic in human and veterinary medical settings, such as sedation in intensive care, or as a rare method of treating depression or bipolar disorder for people who have not responded to antidepressants, the bulk of ketamine use is recreational. It’s currently classified in the US as a Schedule III drug, meaning it has an accepted medical use. Street nicknames include Special K, Vitamin K, super acid and cat Valium. 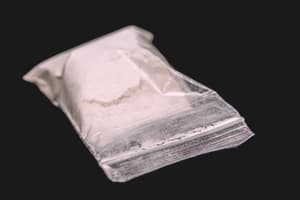 The documented use of ketamine dates back to the early ‘70s, but it was primarily used for psychiatric and academic research during the ‘70s. By the end of the ‘90s, dance club culture had adopted the drug and it became increasingly popular throughout Asia. Ketamine use soared in Hong Kong amongst illicit drug users under the age of 21 during the 2000s, rising from 36.9% of young drug users to 84.3% in 2009, while a 2003 urine sampling at a club in Taiwan showed that 47% of club goers showed high rates of ketamine use. In the US, an estimated 203,000 people used the drug in 2006, and numbers have likely increased since then.

Recreational ketamine use is primarily used in a group setting in the context of a party or rave. Because of the brief and mild hallucinatory effects, it’s often recommended that ketamine users take the drug in groups. But in the case of ketamine addicts, their use often becomes more solitary and isolated, with many reporting a psychological withdrawal syndrome.

Ketamine use typically produces feelings of euphoria. It’s often highlighted by a dissociative state characterized by the user feeling detached from their body and even their surroundings. These feelings became even more marked as the amount consumed increases. The antidepressant effect of the drug is also rapid and lasts anywhere from one to two hours. It can also increase the effect of other sedatives such as alcohol when taken at the same time.

Several studies have shown that ketamine could be a possible treatment for a variety of disorders. An 18-person case study released in 2006 on individuals with severe depression found that their condition drastically improved within hours of a single ketamine injection, with the effects lasting for up to a week. It’s also currently being used as an experimental treatment for complex regional pain syndrome (CRPS). Psychiatrist Demitri Papolos has also used ketamine on children with a subtype of bipolar disorder known as “fear of harm.”

Some countries don’t see any benefits related to ketamine use, though. Last month, the drug was reclassified as a Class B banned substance in the UK, which can lead to five-year jail sentences for possession and 14-year sentences for dealing. Although ketamine has been banned as a recreational drug in the UK since 2006, 120,000 Brits reported using the drug in 2012.

Although death from ketamine use is not unheard of, it’s also uncommon. Ketamine was associated with 46 overdose deaths in the US in 2009, while up to 21 people have died from ketamine in the UK each year since 2009.

For this reason, and because of its relatively mild classification in the US, it’s unlikely that we will see any changes to the status of ketamine in the immediate future. However, it’s possible that the drug will become a more widely accepted form of treatment for depression and drug addiction in years to come.