Are Gay Teens at Higher Risk for Addiction?

Addiction is a very complex disease. The factors that predispose for an addiction are varied and tend to overlap.

The holistic consensus is that there are both physiological and socio-cultural determinants — nature and nurture — when trying to identify the causes of addiction. As such, there is an increasing focus on identifying those individuals who are more at risk for developing an addiction.

According to new literature, homosexual teens are one of the highest risk groups for developing a substance abuse disorder. But why is that?

In theory, a minority group is a sociological term describing a category or subgroup within a demographic; such a subgroup is differentiated and defined by the social majority. In practice, however, a minority group is frequently a group of individuals targeted and stigmatized by society.

There is a lot of social stress inherent to minority groups; the various stressors (such as experiences of prejudice, rejection, having to hide or internalize aspects of self) can have a profound negative impact on mental health. When minority/individual values clash with dominant/societal values, it results in much internal discord and conflict, or minority stress.

Research is showing that gay and lesbian teens experience physical and mental health problems, including addiction, at significantly higher rates. The stress of discrimination, rejection, and harassment, or having to conceal ones sexual orientation, results in decreased health and poor lifestyle choices.

The University of Pittsburgh has conducted studies on the substance abuse rates of gay teens, and the figures are quite telling. According to research, LGBT teens experience exponentially higher rates of cigarette, alcohol, and marijuana abuse; other frequently abused substances include cocaine, methamphetamines, and injection drugs such as heroin. 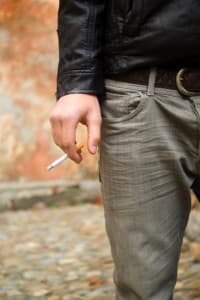 Additionally, when gay teens use drugs as coping mechanisms, mental health issues—such as depression and anxiety—can be exacerbated and made significantly worse. LGBT youths, and males in particular, resort to criminal behavior (i.e., prostitution and selling drugs) to feed their addiction. In such cases, using drugs to deal with the minority stress of homosexuality can lead to being expelled or dropping out of school, running away from home or homelessness, and further rejection by family and friends.

Teens questioning their sexuality or who identify as LGBT need love, support, and acceptance like all other teens. Adolescence is a difficult period characterized by stress, insecurity, uncertainty, anxiety, and sometimes even fear of the future or the newness of puberty. Stigmatizing an adolescent for his or her sexual preference is a slippery slope; rejection and the need to feel “normal” and be accepted can lead to harmful behaviors to escape the pain and cope with social persecution.

If you or someone you know is struggling with substance abuse, consider looking for addiction treatment centers in your area today.

Dane O'LearyAUTHOR
Take the next step