So You Married an Addict: Is it Time for a Divorce?

Tristan and Alisha, both in their 30’s, had been married for a few years before Alisha’s addiction began to take a toll on the relationship. “I was hiding bottles,” she says. “I was lying. I was sneaking around. I was terrified that if Tristan found out about how much I was drinking, he’d leave me. But I was even more terrified to stop drinking.”

With her marriage on thin ice, Alisha finally got sober with the help of a 12-step program. She has been sober for more than five years and says her sobriety saved the marriage. Tristan and Alisha were lucky; they successfully weathered the storm of addiction. But what about the marriages that fail as a result of drugs and alcohol? Is addiction grounds for divorce?

Alisha and Tristan certainly aren’t the only couple to face the challenge of addiction in a marriage. There are an estimated 12-13 million alcoholics living in the U.S., 1-2 million cocaine addicts and at least eight million people battling eating disorders. And these numbers are likely an underestimation, as they don’t account for addictions to gambling, shopping, sex and other substances or behaviors. 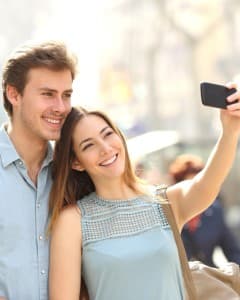 If you’ve ever been in a relationship with an addict, you know the dependency affects everyone – family members, friends and even co-workers. Add a marriage contract into the mix and you’re suddenly responsible for your partner’s actions. If she gets a DUI, for example, you’re likely the one getting phone calls from the police, paying to bail her out of jail or seeing your car insurance rates go through the roof.

Addiction puts enormous strain on a marriage. And no matter how much you plead for your partner to stop or how many ultimatums you give her, there’s a good chance she will continue using.

“I got busted driving drunk,” says Alisha. “Tristan told me if I ever did that again, he’d break up with me. I wish I could say I stopped right then…but I didn’t.”

Addiction is a progressive illness. Simply put, things get worse if your spouse continues to use her substance of choice without seeking treatment. And though you might try to step in, she has to want – and be willing to receive – help. If she doesn’t truly want to change, it can take a terminal toll on the romantic partnership.

Take Alex and his wife of two years, Lisa, for example. “Lisa literally begged me to get sober. And I just wasn’t ready,” says Alex. The two ended up taking a “break” when Alex was at the height of his addiction to alcohol and painkillers. “After I went to rehab and got sober, I had to work very hard to get her back and rebuild that trust,” he says. “It’s an ongoing process and we are still working on fixing the relationship. But we’ve made a lot of progress.”

Many other couples are not so lucky. Jim says his alcoholism was “the final straw” in his marriage, which had been slowly falling apart for years. “I was a mess. DUI’s, infidelity…you name it.”

But even after their separation, it took Jim four more years of heavy drinking before he was finally able to recognize he had a problem and get help. They have since gotten a divorce and share custody of their two children.

…though you might try to step in, she has to want – and be willing to receive – help. If she doesn’t truly want to change, it can take a terminal toll on the romantic partnership.

Fighting for Your Family

For many people struggling with addiction, the threat of a partner leaving is simply not enough to make them seek help. While many people say the marital separation, divorce or threat of divorce was part of their “rock bottom,” if they don’t have the desire to stop using or drinking, they probably won’t seek help.

If your partner is struggling with addiction, it can be helpful to get a professional involved and to seek support from others who have a similar experience. There are 12-step programs, such as Al-anon, CoDA (Codependents Anonymous), ACoA (Adult Children of Alcoholics) and other programs designed to support the partners of people with addiction. It can also be helpful to find a therapist who specializes in addiction and recovery, for individual and/or couples counseling.

If these steps fail, legal separation or divorce is an option. You may want to reach out to an attorney and schedule a consultation. During the initial meeting, you’ll be able to find out if divorce is the right step for you and learn what the process entails.

Though getting a divorce can be heartbreaking and painful, it can also be the healthiest way to protect the health and well-being of the whole family. If there are children involved, your main goal should be to ensure they are in a safe, stable home around a responsible, healthy adult.