A Complete History of Cocaine 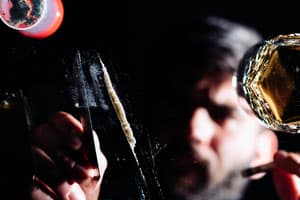 Cocaine has gained a reputation as being the drug of the rich and famous, but that hasn’t always been the case. The images of hazy-eyed rock stars and models taking copious quantities of the drug are recent ones, and the history of cocaine goes back thousands of years.

In the beginning, as they say, there was the coca leaf. It’s a pretty benign-looking object, being green and generally leaf like. Indeed the raw leaf contains about 0.25 and 0.75 percent cocaine. Basically, the leaf won’t produce euphoria.

The tree probably produced this compound as an insecticide, just like eucalyptus trees produce eucalyptus oils to ward off hungry insects and holly bushes are prickly to ward off hungry animals. Either way, local people soon discovered that the leaf could be chewed to produce a mild stimulant that suppresses hunger and even wards off pain. This is useful as the combination of back breaking work and high altitudes meant that accidents were common, and soporifics like alcohol aren’t much use at these altitudes.

The leaf could be chewed as-is or an alkali could be added. Common sources of the alkali were crushed sea shells. These would be heated to produce quicklime and then water poured over them to create calcium hydroxide. This would be added to a paste of the leaves and then consumed.

This use by the Peruvian Incas happened for thousands of years—indeed people were buried with it and the paraphernalia needed to harvest and consume it—until the Spanish arrived. The Spanish had received permission to conquer the Incas in 1529, and they attempted to do so with just 168 men. They had better tactics, however, and the Incas had annoyed a lot of peopile, who joined the Spanish. The Spanish also had gunpowder. 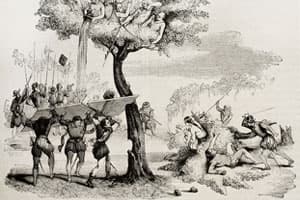 The Spanish eventually assassinated their way to the Inca emperor, and they quickly realized they could win without a costly battle. The emperor, Atahualpa, was put to death in 1533. Various diseases wiped out the remaining Incas.

The Spanish quickly realized that the Incas revered the coca leaf, although they initially denounced its use. It wasn’t until they tried it themselves that they realized it actually did what the Incas said it did. They used it as an anesthetic and for its stimulating effects.

Its use was ignored by Europe for almost 200 years, as the gold and other valuables coming from Peru were much more profitable to transport than this somewhat unassuming leaf.

As a curiosity, coca leaves were studied and attempts were made to extract the active ingredient. The main ingredient was isolated in a small batch in 1855, but the drug didn’t receive much attention until an Italian neurologist by the name of Paolo Mantegazza wrote a paper about the leaves, praising its medical and hygienic properties. He had traveled to Peru and observed the natives happily munching down on the leaves. He said of coca, “God is unjust because he made man incapable of sustaining the effect of coca all life long.” A year later, the active ingredient was isolated from a much larger batch He noted that it produced a peculiar numbness on the tongue.

The medicine revolutionized surgery overnight. Doctors found it could paralyze nerve endings at the location where it was injected, which meant teeth could be pulled and eyes could be operated on without full anesthesia.

As was common with many drugs at the time, cocaine would be added to alcohol to create cocaine. The most common and popular brand was Vin Mariani, sold as a “popular French tonic wine” and even the Pope at the time became addicted to it—he would carry it around in a hip flask. In the United States, Pemberton’s French Wine Coca became a popular drink, and it was a precursor to Coca-Cola. It’s interesting to note that while Coca-Cola certainly contained some cocaine originally, it’s not possible to say how much due to the vagueness of Pemberton’s recipe.

Cocaine use had exploded, although the realization that addiction could be a very serious problem had also been acknowledged. Sherlock Holmes was one fictional user, and it’s remarked in the books that it was one of his few vices. The detective first appeared in 1887, so it’s clear that addiction was a hot topic in Victorian society.

Sigmund Freud was a big proponent of the drug, and a US manufacturer sold cigarettes and a mixture that could be injected directly into the vein. It was also carried by a number of explorers to relieve fatigue and numb the pain of tired limbs.

Laborers would use cocaine to help them work harder, and it was sometimes supplied by their employers. Many of these people were African-Americans, and it helped them work far longer than they should have done.

The media, displaying their usual sensitivity and tact, quickly seized on this use of cocaine and started to create stories of African-American laborers seducing white women and acting violently. It was even linked as a specific cause of rape by African-Americans. This lead to rioting after the fear reached epidemic proportions, and it also lead to a shoot first, ask questions later policy among the police forces of the time.

This created alarm throughout various cities, and several states moved quickly to ban the drug. Eventually, the federal government stepped in. The 1914 Harrison Act insisted that various drugs, including cocaine, could only be dispensed under a doctor’s prescription. A second law, the 1922 Jones-Miller Act, saw heavy restrictions imposed on those who made cocaine. 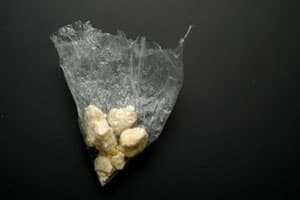 Cocaine use stalled for the first time in decades.

Cocaine use saw an upsurge in the ‘70s, when stars and the wealthy would take it to combat fatigue and provide euphoria. In the poorer areas of LA, a new form of cocaine was found in ’84: crack cocaine.

This drug was made by adding bicarb and water to cocaine and heating, and it would form little rocks. These rocks could vaporize at around 194°F, making it much easier to smoke. This meant it would create a very rapid and intense feeling of euphoria.

Whether it’s taken in the form of a leaf, smoked, or snorted, cocaine is still an issue, and addiction is a very real possibility. The nature of the drug means it’s impossible to determine how pure it is, and long-term issues include psychosis and heart problems, as with any stimulant. If anything, history shows that cocaine will continue to be an issue, but it is possible to seek cocaine addiction treatment. Call our toll-free hotline at .

Cocaine
Want to get help, but not ready to talk?
Instead, sign up for text support to receive: